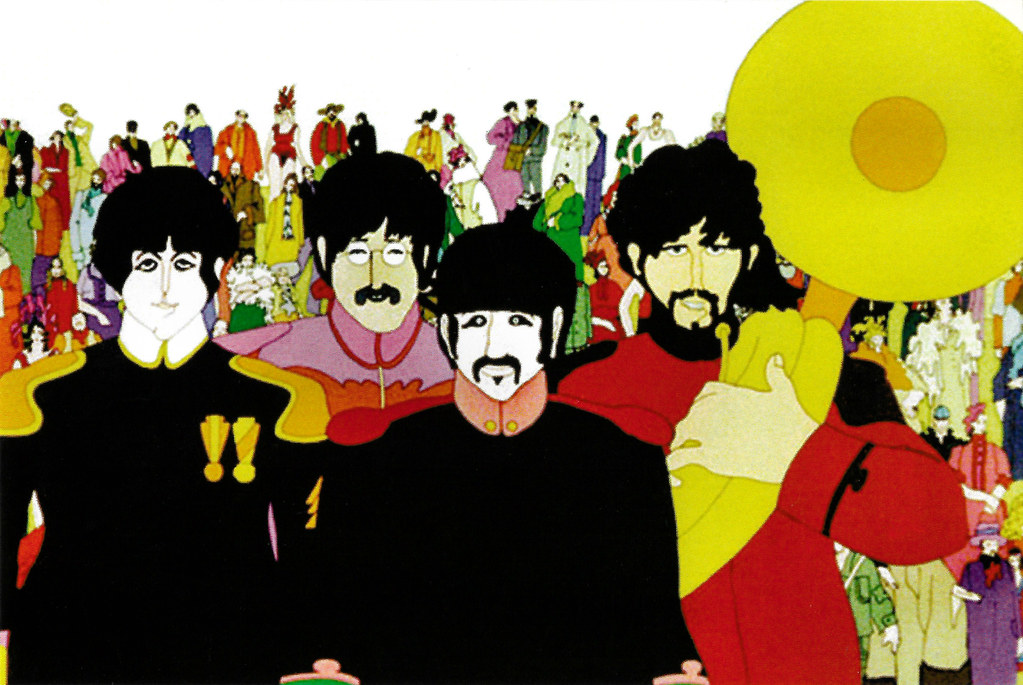 “Yellow Submarine” is a psychedelic adventure in animation from the late ’60s featuring many songs by the Beatles. The music and animation are both terrific. However, I think the film is a bit scary for young children.

When the music hating Blue Meanies take over Pepperland and freeze everyone within it, including the protectors, Sgt. Pepper’s Lonely Hearts Club Band. Captain Fred (Lance Percival) and his Yellow Submarine recruit The Beatles to help save Pepperland. Along the way, they fall through the Sea of Time, Sea of Nothing, Sea of Holes, and more. They meet Jeremy Hillary Boob Ph.D. (Dick Emery) and take him with them along the adventure. When at Pepperland, The Beatles “rally the land to rebellion” and take down the Blue Meanies, the four-headed Meanie dog, and the Dreadful Flying Glove (with the songs “Sgt. Pepper’s Lonely Hearts Club Band”, “With A Little Help From My Friends”, “Hey Bulldog”, “All You Need is Love”). In the end, we see all four live-action Beatles singing “All Together Now”. – Imdb.com

The movie begins in Pepperland, a very peaceful and happy community beneath the sea. Pepperland thrives on music, provided by Sgt. Pepper’s Lonely Hearts Club Band. A sinister group of people known as Blue Meanies decide to attack Pepperland with their army of unusual characters, such as apple bonkers, snapping turks, and a flying glove. They first attack the band with a giant bubble of blue glass, which they get trapped inside. Then they go after the citizens with the rest of their army, including the flying glove. When all seems lost, the mayor tells Old Fred to set sail aboard the Yellow Submarine and get help. As Fred leaves, the mayor gets bonked with apples.

Old Fred stops in Liverpool, where he meets the Beatles, who are hanging out at the Pier. He begs them to join him in rescuing Pepperland from the Blue Meanies, and they agree. 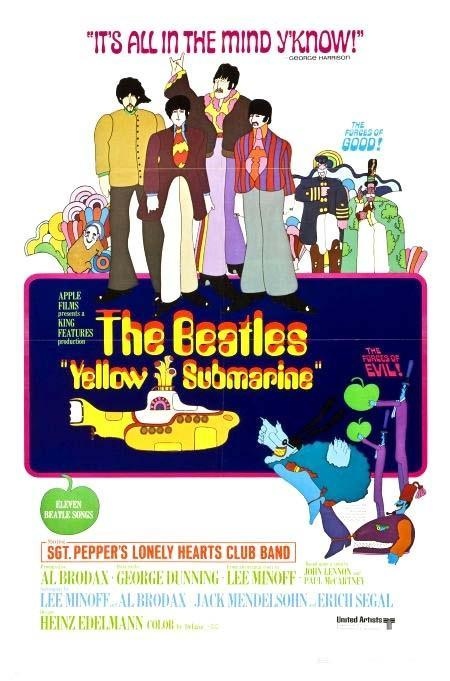 Finally they arrive in Pepperland, where they are soon joined by Old Fred. They revive the mayor, who tells them that they can pass as Sgt. Pepper’s band and ready the land to rebellion with their music. They do so and also rescue Sgt. Pepper’s band by placing a hole, which Ringo had taken from the Sea of Holes and kept in his pocket, over the glass which encases them. Defeated, the Meanies begin running away, but the Beatles invite them to join Pepperland for a celebration of peace, love, and music.