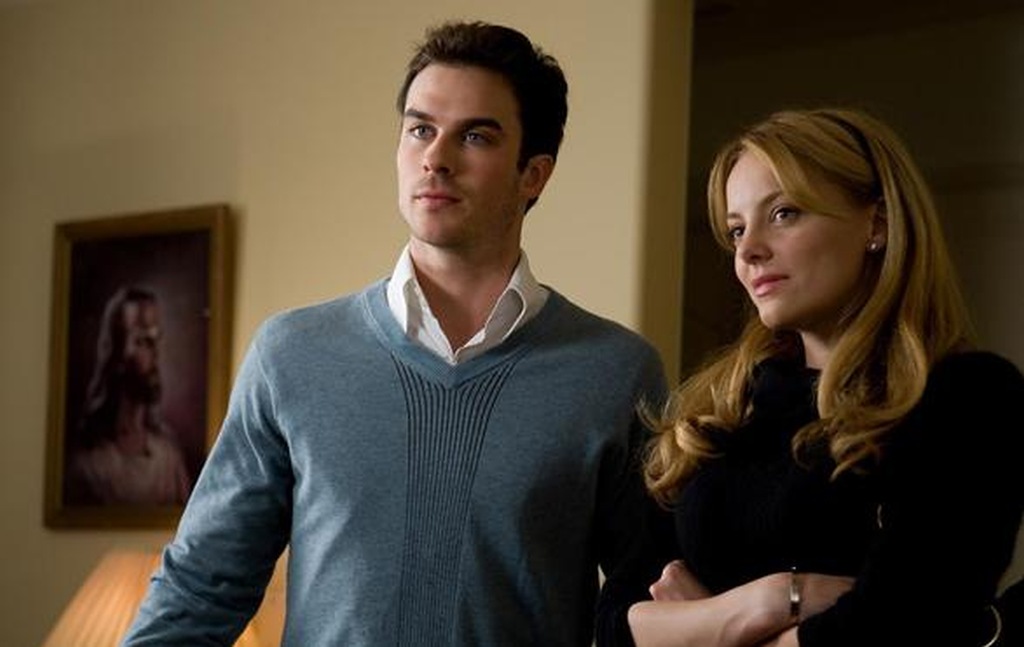 Reviewed at AFM, “Wake” stars Bijou Phillips (“Almost Famous”) as offbeat Carys Reitman, an emotionally isolated young woman who regularly attends funerals of strangers. When she meets a man who is mourning the lost of his fiancée, she connects with him and his pain, only to discover that perhaps she’s not the only one with a dark secret.

In the opening scene, she lies on the mortician’s table seemingly dead as Shane, played by Danny Masterson, applies makeup. The scene sets the tone of this movie, a quirky romantic / comedy that travels through a quandary of mishaps and escalating pretenses. It’s an enjoyable ride, even when contrived and manipulated.

At one fateful funeral, she unexpectedly meets Tyler (Ian Somerhalder). There she is pulled into his world by the love and admiration he has for his now departed girlfriend. Later when Carys reaches into the coffin and holds the hand of the dead girl, the girl’s engagement ring falls off in Carys’ hand. Tyler enters and Carys pretends to be a friend of the dead girl while trying to hide the ring. Thus begins a series of deceptions and a very precarious romance.

While the concept is engaging, the execution of the story could have been better. In most good movies the story evolves through the characters’ wants and actions, this one appears grounded in getting the shot rather than the performance. It seldom comes off the screen as being alive and real. One of the ingredients missing is the inner struggles of the characters. How they react to the perils of death, new friendships, mistrust, and falling in love. At times, situations seem contrived for the sake of plotting. Instead, I wanted to see those organic moments of reflection, anticipation, moments of decision and indecision. What we get is mainly surface acting and little of what’s churning underneath.

Bijou Phillips plays her role as the gorgeous, sweet, funny, and quirky gal whose idea of ​​a fun is hanging out with the bereaved. You might call it coffin dating. She’s comfortable in black, but it also shields her secret, the funeral she never had. Danny Masterson plays Shane, the mortician, a close friend of Carys. By helping her gain entrée to funerals, he puts his job is in jeopardy. Ian Somerhalder portrays Tyler, the mourner turned love interest, and does so with well placed foreshadowing disguising his true motives. Jane Seymour plays Carys’ estranged mother and carries a burden of her own. Marguerite Moreau is Carys’ well-traveled roommate searching for love in all the wrong places.

Production credits are first-rate and the editing and sound are both professionally done. Music intercuts popular songs with mainly electronic scoring. Film was shot in and around Los Angeles and the production had its world première as the Opening Night film at the Cinequest Film Festival in San José, California.