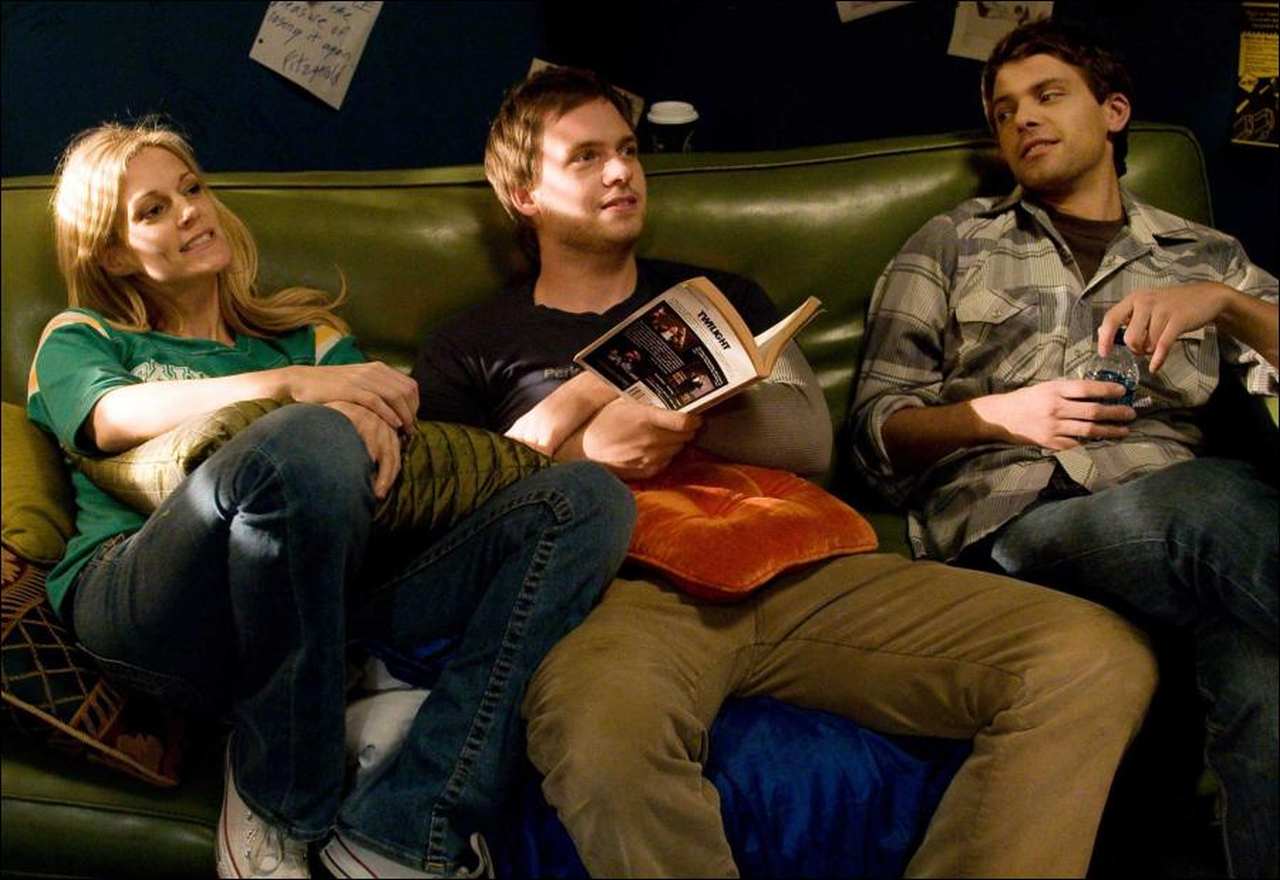 “Weather Girl” is a frothy romantic comedy about a “sassy weather girl” who has an on-air meltdown. On the Seattle morning TV show, she reveals that the show’s anchor has cheated on her. Tricia O’Kelley (“Gilmore Girls”) plays weather girl Sylvia Miller and after her career suicide finds herself with no job, no boyfriend, and no apartment. With no savings, she is forced to move in with her younger brother Walt, played by Ryan Devlin.

Sylvia, approaching 35, is the “sassy weather girl” at a Seattle TV station. On a live broadcast, she castigates her boyfriend Dale (who’s the show’s anchorman) for sleeping with his co-anchor; then she quits. She’d been living with Dale, who explains himself by saying she’s cold, so she moves in temporarily with her younger brother Walt. His neighbor Byron, a computer programmer, is always in Walt’s flat working. While Sylvia looks for a job, Byron offers himself as a no-strings-attached rebound-sex partner, with the condition that she not tell Walt. How will she respond, and what about finding work, living with her brother, sorting things out with Dale, and being cold? – Imdb.com

He and his best friend, Byron (Patrick J. Adams) suck as a support team and hinder her return to sanity. Attempting to cope at age 35, she relies on her gal-buddies (Kaitlin Olson & Alex Kapp Horner) for advice. They set her up with an accountant (Jon Cryer) who on their first date has their life together planned out down to the number and sex of their children.

After a series of job interviews, which laughingly focus on her meltdown, she has to take a job as a waitress working for restaurant owner JD played Jane Lynch. Driven into despair she begins an unlikely romance with a younger man, her brother’s best friend. They promise each other it’s nothing more than a physical relationship, yet it slowly grows into a repressed love affair.

While predictable and lighthearted, “Weather Girl” delivers with a fast-moving scenario that is always fun and entertaining. What makes it likeable is a cast that polarizes the story and gives it emotional definition. Mark Harman (“NCIS”) plays the sleazy lecherous anchor whose persuasive powers seem as empty as his teleprompter readings. It’s a cardboard character, but well-done cardboard character and even in his comeuppance scene he remains callous and despicable as he attempts to rewrite the truth. Tricia O’Kelley is the energy force in this film. When her world comes tumbling down, she plays her role with spunk rather than seeking piety. She could have been much stronger were it not for her facial gyrations, as it made it difficult to grip what’s going on inside.

The brother and his friend provide a disruptive counterpoint to the Sylvia’s aims, but they are too much alike in looks and attitude to make a strong impact as individuals. The insightful cameos by Jane Lynch, (“Two & a Half Men”) Kaitlin Olson (“Two & a Half Men”) and Alex Kapp Horner (“The New Adventures of Old Christine”) bring the women’s viewpoint to the story in a comic and ironic way. They tell us that marriage and a job, any job, any man is more important than a loving relationship. Jon Cryer’s (“Two & a Half Men”) brilliant portrayal of the anal-thinking accountant is the catalyst that turns Sylvia away from any serious relationship to one that is purely physical. Enrico Colantoni cleverly plays the show’s TV director, one who knows the potential of confrontational television. You will like his choices in choosing camera angles.

Production values ​​are first-rate. Shot on location in Seattle and Los Angeles, the film has a beautiful sense of space, timing, and direction, a tribute to writer / director Blayne Weaver. With marquee television stars, the film should play well in theaters but its best home will likely be on the small screen where its prime demographic target audience resides.