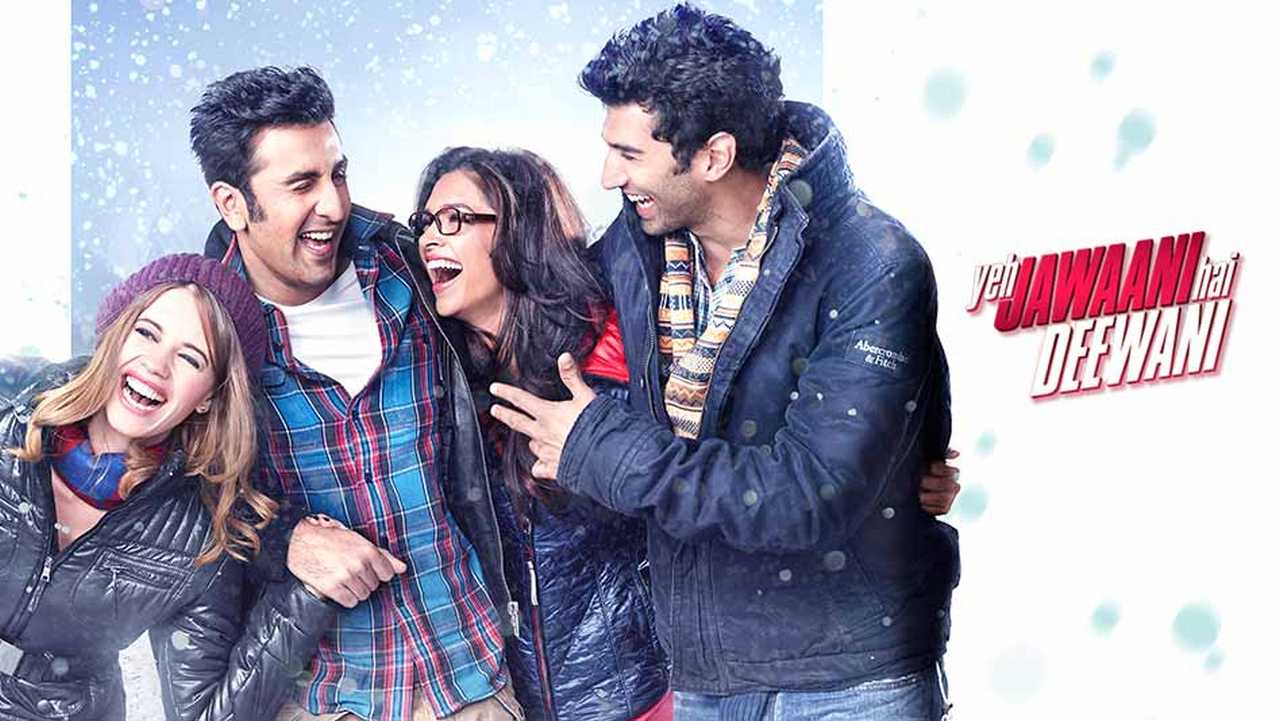 He serves you cold soup this time and that isn’t the worst part – he also serves you the same soup. With a heavy handed treatment; it feels like your college canteen’s old lunch lady’s made the soup. That’s how lazy Ayan Mukherjee is this time – his story is trite, his dialogues are stale, his characters are hackneyed, their situations clichéd and their resolutions tiresome. This guy seriously needs to grow out of this ‘follow your dreams’ ‘accept change’ ‘settle down’ phase; Yes, he got his chance in ‘Wake Up Sid’ and he fared well, but this is plain directorial lethargy.

Yeh Jawaani Hai Deewani is the story of the relationship between two characters, Bunny (Ranbir Kapoor) & Naina (Deepika Padukone), at two separate but defining times in their lives… first, when they are just out of college and standing on the crossroads of multiple decisions that will shape who and what they become… and then later on, in their late-twenties when they meet again, holding on to certain fulfilled and certain unfulfilled dreams, at a crossroads of another nature this time… how these two characters affect, change, befriend and eventually fall in love with each other is the journey the film aspires to take us on… – Imdb.com

Deconstructing Yeh Jawaani Hai Deewani’s plot shall begin with a cliché – it’s about four young friends. Oh, a respite – two are boys and two are girls so it’s not the ‘all-guy film’ or the ‘all-girl film’. This film starts with one of the girls reminiscing her past, as the other is to get married. The girl who’s narrating is Naina Talwar (Deepika Padukone), and she takes us eight years back into the past, when she was studious, plain-Jane, good-girl Naina. And as all studious good-girls need to be spectacled, she dons one. Still looks hot in it, but since it’s Bollywood and spectacles is equal to ‘behenji or nerd’, our Naina’s totally ignored by guys.

She’s in the supermarket with her snobbish mother, shopping in her little skirt / shorts (anyway, she’s showing legs, but nobody notices because she’s got ‘spectacles’ on). She hears someone yell near the exit counter; it’s Aditi, her former schoolmate. Aditi is mad at a young stout kid who was checking out her legs (according to her). He tells her she’s not that hot – she gets madder. Naina approaches her, they greet, Naina’s mother talks about her daughter, Aditi praises Naina for being the ‘padhaku’ type and then tells about her trip to Manali. The scene ends with Naina being secretly invited by her to the trip.

Next scene at dining table. Naina’s mom’s insulting Aditi for being the ‘bad girl’. Naina throws a tantrum with ‘I want a holiday’ and then leaves the table. Next we see her checking out Make My Trip Site, probably co-sponsors for this film because they’re everywhere! Our brave girl Naina slips out the next day and joins Aditi for the trip but Aditi isn’t alone – she’s with Bunny and Avi.

We’re already introduced to these two chaps – Bunny is the photographer who dreams of traveling around the world (for some reason, Ayan can’t think outside the box; Ranbir Kapoor in Wake Up Sid = photographer, Ranbir Kapoor in Yeh Jawaani Hai Deewani = photographer) while Avi is an alcoholic who loses lots on gambling (no idea how he gets the money). We first find Bunny in a brothel filming with a foreign crew about prostitutes; So there’s the usual ‘spicy talk’ with the prostitute, then a totally purposeless dance number featuring Madhuri Dixit. But we know why it’s been added – it’s a Karan Johar production, he was a judge with Dixit on a dancing reality show, he must’ve thought it appropriate to randomly place her in a dance number that’s got NOTHING to do with anything. She looks lovely though, and her dancing is sensuous and expressive but why on earth (or why in a brothel of all places) is it there?

So Bunny’s the photographer who calls his step-mom ‘step-mom’ (ridiculous and childish – why not the first name?), Avi is the faltu (useless) alcoholic, Avi is the cool girl and Naina the ‘scholar’. All board the train to Manali, their trip being sponsored by MAKE MY TRIP (they could’ve just had the four break the fourth wall and shout ‘I love Make My Trip!). They meet hot chicks, and Bunny has a crush on one of them called Lara, a hot but dumb chick like you see in every other college movie; the girl actually has a background music ‘played whenever she’s on screen and it’s so kiddish, your brain feels embarrassed that it has gifted you the power of hearing for these sounds. Okay, so on trip our Naina loosens up (she wears lenses and voila turns into a hot crazy babe in a day), begins enjoying life (she gets drunk. Don’t tell her fussy mom though) and falls in love with Bunny, who’s commitment-phobic. There’s a scene where both Naina and Bunny scream from the edge of a hilltop and you really wish they’d slip and fall to their deaths so the film could surprise us.

The film never does surprise us. Our hero Bunny leaves for US after the trip, Naina becomes Aditi’s best friend, Aditi decides to marry a podgy guy named Taran after Avi doesn’t reciprocate the feelings she has for him, while Avi remains a drunkard and is in huge debt. The second half’s more embarrassing and most of its set around Aditi’s marriage. Random characters come and go and we are meant to chuckle (we don’t, not once). There are the ‘buddy movie serious scenes’ we don’t care about; They’re a chockfull of banal moments stuffed with platitudes you’d find on Facebook, written by IQ 100 boys and girls who only think their crappy thoughts are profound.

One think I observed in Yeh Jawaani Hai Deewani which I pretty much took notice of in other commercial Bollywood movies but did not bother to report is the absence of spontaneity among actors. Take the scene where Deepika and Ranbir are alone at camp-site and she can’t resist him; She holds his hands even after their conversation is done.

To show this, Ranbir has a dialogue ‘Then why are you still holding my hand’ which then reveals her hand holding his. Wouldn’t it have been been better to frame the two characters from a distance and show her spontaneously holding his hands and not leaving them? It was such a delight to watch Meryl Streep and Eastwood fall in love in Bridges of Madison County because both were responding slowly without the need for any mechanical gesture or motion. Bollywood however thrives on mechanical motions that just feel inauthentic.

Deepika is more than tolerable as the nerdy woman but her character’s so easily transformed into a beauty queen only based on the hideous notion that wearing spectacles makes you nerdy. Ranbir is a method actor and I really wonder what he thought about the randomly inserted dance numbers – did he never question Ayan why his character could dance and sing like a professional? Or probably his bank account was so overstuffed with Johar’s money that he overlooked everything else. Kalki and Aditya Roy Kapur are passable in their poorly written roles.

This kind of film minting hundred crores at the box office is sheer criminality. Don’t encourage Ayan Mukherjee to make more like these! Stop Johar from making money like this!

And do reconsider your Make My Trip subscription if you have one – they’ll take you to Kashmir, calling it Manali! (in case you are wondering, the filmmakers have been accused by Omar Abdullah of shooting in Kashmir and then deeming it Manali in the film)