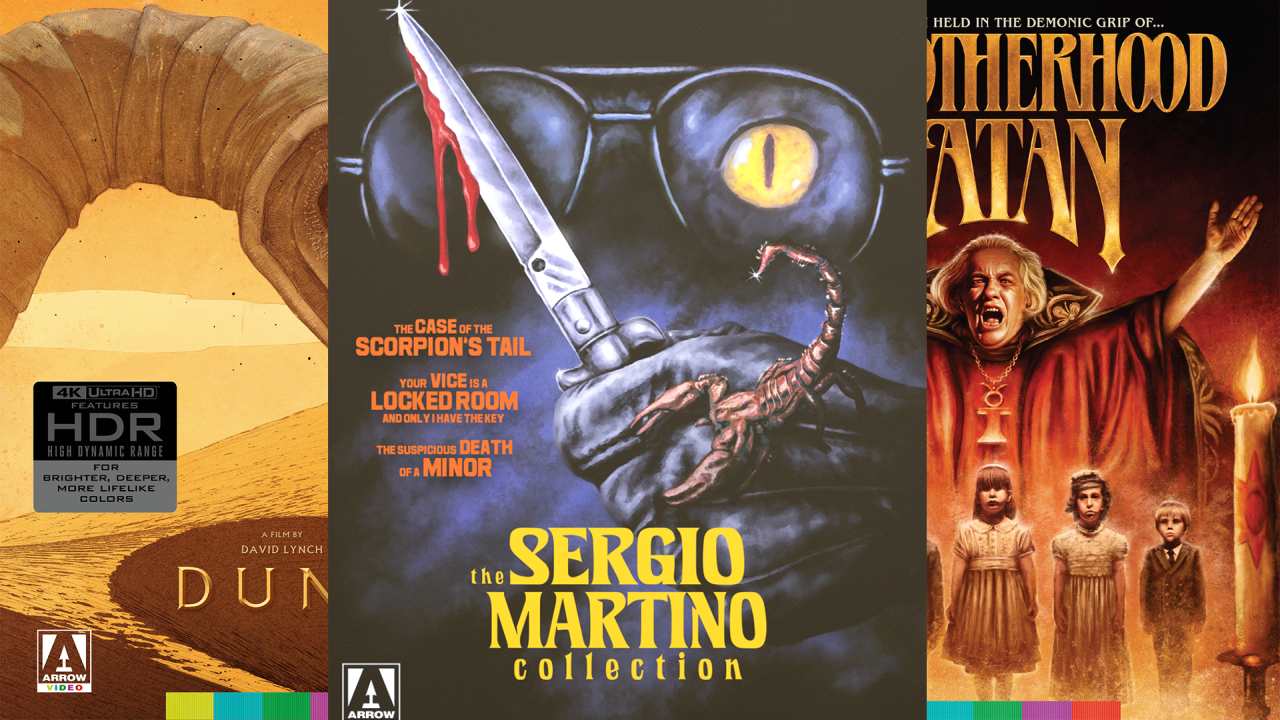 As we enter the dog days of summer, Arrow continues to turn up the heat. On August 3rd, Arrow will kick things off with the release of The Sergio Martino Collection. This 3-disc set features three classic films from one of Italy’s most celebrated genre filmmakers. George Hilton stars as an insurance investigator trying to get to the bottom of a strange string of murders in The Case of the Scorpion’s Tail. This early ’70s giallo effort was praised by The Terror Trap as “one of Martino’s best crime thrillers and validates the notion that the director is indeed capable of creating high-intensity nailbiting moments.” Next, Martino takes on Edgar Allen Poe in the wonderfully titled Your Vice is a Locked Room and Only I Have the Key. Martino borrows elements from Poe’s “The Black Cat” to craft this tale of a series of murders around the estate of a degenerate author and his wife. In The Suspicious Death of a Minor, the murder of a prostitute leads to the discovery of a trafficking ring with ties to powerful people. All three films come with 2K restorations from the original camera negatives.

On August 24th, Arrow will release two titles. First up is 1969’s Blind Beast. This story of a blind sculptor that kidnaps a young model with the help of his mother comes courtesy of director Yasuzô Masumura. Dubbed a “fascinating curiosity” by Sight & Sound and “continually astonishing” by SFX magazine, Blind Beast is a strange slice of erotic horror from one of post-war Japan’s most important filmmakers. Also coming from Arrow on August 24 is the UHD 4K release of Dario Argento’s classic giallo starring Academy Award winner, Karl Malden, The Cat O’ Nine Tails. A newspaper reporter and a retired journalist work together to get to the bottom of a series of killings in the director’s second effort. This straight forward murder-mystery offers an early glimpse into the style and technique that would later become Argento trademarks.

Arrow brings the month to a close with two titles on August 31st. A cult of senior citizens recruits the children of a desert town to worship Satan in director Bernard McEveety’s The Brotherhood of Satan. This low-budget horror entry was notable for giving theater patrons a packet of seeds during its original theatrical run. The seeds were labeled as “Satan’s soul” and claimed to offer protection “from the Black Magic of The Brotherhood of Satan.”

The month’s final title, also hitting on August 31st, is David Lynch’s Dune. One of the legendary director’s most polarizing films, this controversial adaptation of Frank Herbert’s beloved novel has acheived indisputable cult classic status over the years. There is no denying that it is a spectacle to behold with a wonderful cast, and it arrives just ahead of the new blockbuster remake. Arrow presents the film with a brand new 4K restoration on both limited edition Blu-ray and UHD 4K Blu-ray.

One of Italian cinema’s most celebrated and prolific filmmakers, Sergio Martino worked across a range of genres, but is arguably best known for his giallo thrillers. This collection brings together three of his finest. In The Case of the Scorpion’s Tail, recently widowed Lisa Baumer is summoned to Athens to collect her husband’s generous life insurance policy, but soon discovers others are willing to kill to get their hands on it. In the Edgar Allan Poe-inspired Your Vice is a Locked Room and Only I Have the Key, abrasive drunk Oliviero amuses himself by holding drunken orgies and abusing his long-suffering wife… but when a series of grisly murders shakes the local community, Oliviero finds himself in the frame.

Finally, The Suspicious Death of a Minor combines giallo and crime thriller tropes as undercover cop Paolo pursues the Milanese criminal outfit responsible for the brutal murder of an underage prostitute, but finds himself up against a killer-for-hire who’s bumping off witnesses before they have a chance to talk. Featuring sensational casts of genre stalwarts, including Edwige Fenech, George Hilton, Anita Strindberg and Luigi Pistilli, with scripts by giallo master Ernesto Gastaldi and sensuous scores by maestro Bruno Nicolai, this is an essential collection for any Italian cult cinema fan.

Following the success of his debut feature, The Bird with the Crystal Plumage, distributor Titanus tasked writer/director Dario Argento with delivering a follow-up in short order. The resulting film, granted a greatly enhanced budget and heralded in its US marketing campaign as “nine times more suspenseful” than its predecessor, was The Cat O’ Nine Tails. When a break-in occurs at a secretive genetics institute, blind puzzle-maker Franco Arnò (Karl Malden, Patton, One-Eyed Jacks), who overheard an attempt to blackmail one of the institute’s scientists shortly before the robbery, teams up with intrepid reporter Carlo Giordani (James Franciscus, Beneath the Planet of the Apes) to crack the case.

But before long the bodies begin to pile up and the two amateur sleuths find their own lives imperiled in their search for the truth. And worse still, Lori (Cinzia De Carolis, Cannibal Apocalypse), Franco’s young niece, may also be in killer’s sights… This second entry in the so-called “Animal Trilogy” found Argento further refining his distinctive style and cementing his reputation as the master of the giallo thriller. Co-starring Catherine Spaak (Il Sorpasso) and Rada Rassimov (Baron Blood), and featuring another nerve-jangling score by the great Ennio Morricone (The Bird with the Crystal Plumage, The Good, The Bad and the Ugly), The Cat O’ Nine Tails remains one of Argento’s most suspenseful and underrated films.

Blind Beast is a grotesque portrait of the bizarre relationship between a blind sculptor and his captive muse, adapted from a short story from Japan’s foremost master of the macabre, Edogawa Rampo (Horrors of Malformed Men, The Black Lizard, Caterpillar). An artist’s model, Aki (Mako Midori), is abducted, and awakens in a dark warehouse studio whose walls are decorated with outsized women’s body parts – eyes, lips, legs and breasts – and dominated by two recumbent giant statues of male and female nudes. Her kidnapper introduces himself as Michio (Eiji Funakoshi), a blind sculptor whom she had witnessed previously at an exhibition in which she featured intently caressing a statue of her naked torso. Michio announces his intention of using her to sculpt the perfect female form. At first defiant, she eventually succumbs to his intense fixation on her body and finds herself drawn into his sightless world, in which touch is everything. Blind Beast is a masterpiece of erotic horror that explores the all-encompassing and overwhelming relationship between the artist and his art and the obsessive closed world that the artist inhabits, with maestro director Yasuzō Masumura (Giants and Toys, Irezumi) conjuring up a hallucinogenic dreamworld in which sensual and creative urges combine with a feverish intensity.

Following a notorious aborted attempt by Alejandro Jodorowsky in the 1970s, Frank Herbert’s bestselling sci-fi epic Dune finally made it to the big screen as the third film by emerging surrealist wunderkind David Lynch, featuring an all-star cast that includes several of Lynch’s regular collaborators. The year is 10,191, and four planets are embroiled in a secret plot to wrest control of the Spice Melange, the most precious substance in the universe and found only on the planet Arrakis.

A feud between two powerful dynasties, House Atreides and House Harkonnen, is manipulated from afar by ruling powers that conspire to keep their grip on the spice. As the two families clash on Arrakis, Duke Atreides’ son Paul (Kyle MacLachlan, in his screen debut) finds himself at the center of an intergalactic war and an ancient prophecy that could change the galaxy forever. Though its initial reception ensured that Lynch largely eschewed mainstream filmmaking for the rest of his career, Dune has since been rightly re-evaluated as one of the most startlingly original and visionary science fiction films of the 1980s. Its astonishing production design and visual effects can now be appreciated anew in this spellbinding 4K restoration, accompanied by hours of comprehensive bonus features.

A small rural town and a family of outsiders, both trapped in the demonic grip of… The Brotherhood of Satan! Recently widowed Ben, his glamourous girlfriend Nicky and his small daughter K.T. are on a road trip across the Southwest, which comes to a screeching halt when they witness an accident. Heading to the nearby isolated desert town of Hillsboro to report it to the Sheriff (played by Jones), they are met with a hostile reaction from the locals, who are gripped by paranoia and fear due to a series of gruesome deaths, as well as the mysterious disappearance of eleven of the community’s children.

As the bodies continue to pile up around them, Ben and his family find themselves joining the sheriff, a local priest and the town’s enigmatic physician Doc Duncan (Strother Martin, Cool Hand Luke) in the midst of a mystery that points towards a deadly satanic cult… Produced by Alvy Moore and L.Q. Jones, a veteran character actor best known for his work with Sam Peckinpah, The Brotherhood of Satan is an atmospheric and chilling tale of terror that provides a crucial missing link between Rosemary’s Baby (1968) and The Devil’s Rain (1975) in the cycle of turn-of-the-seventies shockers involving sinister devil-worshipping cults lurking within the dark shadows of modern-day America.