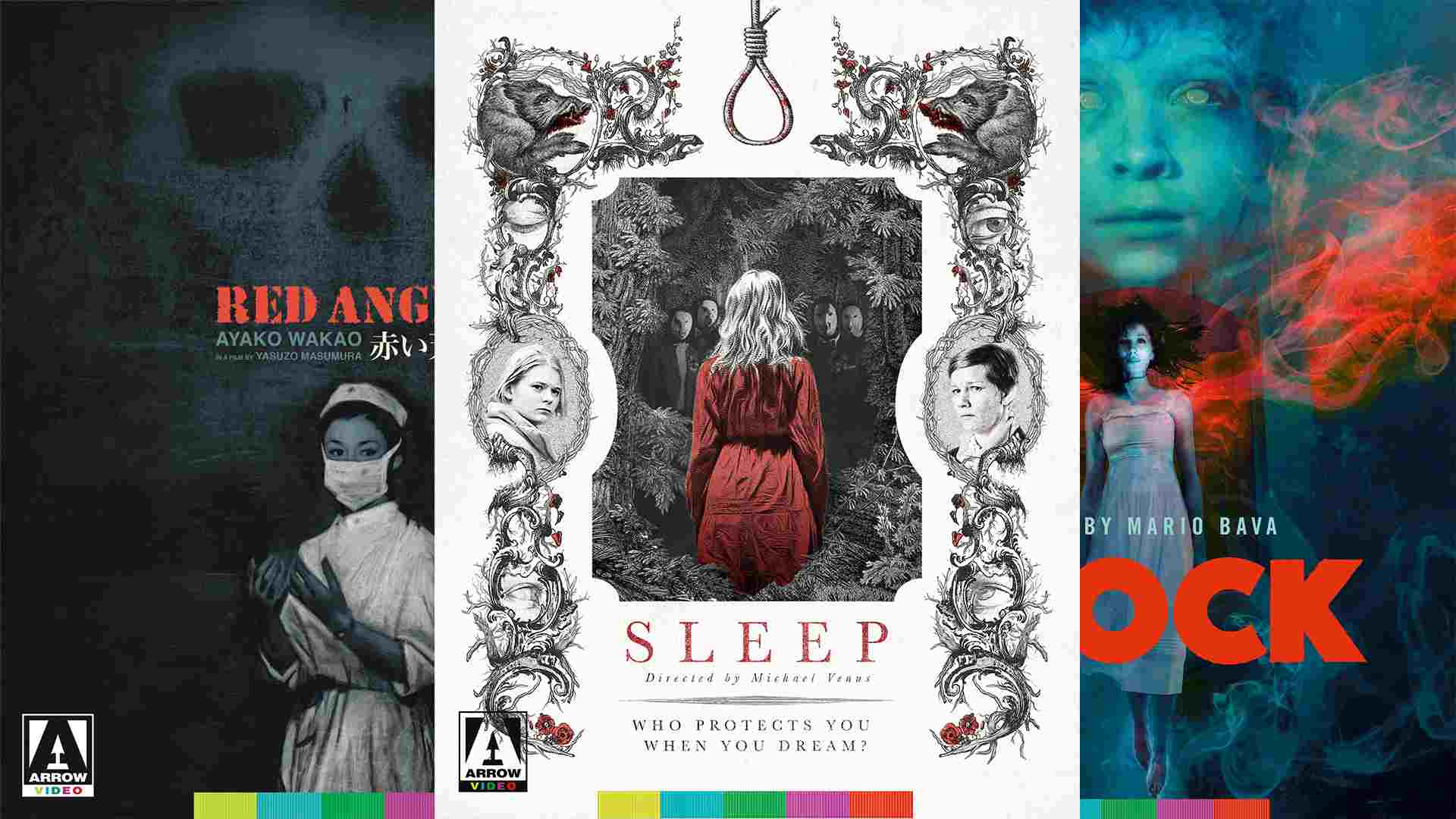 Kick off the new year with Arrow’s latest round of releases beginning on January 18 with Mario Bava‘s Shock. The legendary Daria Nicolodi stars as Dora, a woman that goes through extensive electroshock treatment and then moves into her old home with her young son and her new husband. While in the home, she’s tormented by the memories of her dead first husband. Is she experiencing supernatural events associated with a haunted house or has she merely lost her grip on reality?

Released in the United States as Beyond the Door II, Shock was the last theatrical film Bava would release before his untimely passing in 1980. The Terror Trap praised Shock for containing “all the stylish sequences” Bava is known for and “a handful of disturbingly graphic sequences.” Arrow presents Shock with a brand-new 2K restoration from the original 35mm camera negative. This new restoration features Italian and English soundtracks and newly translated English subtitles. Special features include new audio commentary, new interviews with co-writers Lamberto Bava and Dardano Sacchetti, a video essay, and much more!

Also releasing on January 18 is Red Angel from director Yasuzo Masumura. Red Angel takes a look at the horrors of war through the eyes of Sakura Nishi (Ayako Wakao), a young field nurse on the front lines in China during the Second Sino-Japanese War. While tending the wounds of soldiers injured in battle, Nishi must also be strong enough to deal with their unstable mental state and unwanted sexual advances. Jeffrey M. Anderson of Combustible Celluloid praised Red Angel as “one of the most brutal portraits of war ever filmed,” while Don Willmott of Filmcritic.com called it “one of the most powerful anti-war films you’ll ever see.” Arrow’s Blu-ray release of Red Angel contains a high-definition film presentation with the original uncompressed Japanese audio. Special features include a brand-new audio commentary with Japanese cinema scholar David Desser, a new film introduction by Tony Rayns and a new visual essay from Jonathan Rosenbaum.First pressings will also include an illustrated booklet with new writing from Irene Gonzalez-Lopez.

Arrow’s final release of the month comes on January 25 in the form of Sleep. After being plagued by horrific nightmares of a place she has never been, Marlene (Sandra Hüller) suffers a mental breakdown in a remote village and is placed in a psychiatric ward. Marlene’s daughter Mona (Gro Swantje Kohlhof) follows after her, uncovers dark family secrets, and reveals a curse that threatens her life. This debut film from director Michael Venus earned German Film Critics Association Award nominations for Best Screenplay, Best Feature Film Debut, and Best Editing. Currently, Sleep holds a 94% score on Rotten Tomatoes. Lindsay Traves of CGMagazine awarded Sleep 8 out of 10, writing that the film is “a stunning tale of inherited trauma manifesting as nightmares and the work one has to do to conquer what cannot be physically escaped.” Arrow presents Sleep on Limited Edition Blu-ray for the first time with special features that include an audio commentary track with authors Kim Newman and Sean Hogan, a visual essay from film scholar Alexandra Heller-Nicholas, a conversation between director Venus and star Kohlhof, and a whole lot more!

Directed by Yasuzo Masumura (Giants and Toys, Blind Beast), Red Angel takes an unflinching look at the horror and futility of war through the eyes of a dedicated and selfless young military nurse. When Sakura Nishi is dispatched in 1939 to a ramshackle field hospital in Tientsin, the frontline of Japan’s war of with China, she and her colleagues find themselves fighting a losing battle tending to the war-wounded and emotionally shellshocked soldiers while assisting head surgeon Dr Okabe conduct an unending series of amputations.

As the Chinese troops close in, she finds herself increasingly drawn to Okabe who, impotent to stall the mounting piles of cadavers, has retreated into his own private hell of morphine addiction. Adapted from the novel by Yorichika Arima, Masumura’s harrowing portrait of women and war is considered the finest of his collaborations with Ayako Wakao (A Wife Confesses, Irezumi) and features startling monochrome scope cinematography by Setsuo Kobayashi (Fires on the Plain, An Actor’s Revenge).

In a career spanning four decades and encompassing virtually every genre under the sun, Mario Bava inspired multiple generations of filmmakers, from Dario Argento to Martin Scorsese and Tim Burton. Best remembered for his gothic horror movies, for his final feature, Shock, he eschewed the grand guignol excesses of Black Sabbath or Blood and Black Lace for a more intimate portrait of mental breakdown in which true horror comes from within.

Dora (Daria Nicolodi, Deep Red) moves back into her old family home with her husband, Bruno (John Steiner, Tenebrae), and Marco (David Colin Jr., Beyond the Door), her young son from her previous marriage. But domestic bliss proves elusive as numerous strange and disturbing occurrences transpire, while Dora is haunted by a series of nightmares and hallucinations, many of them involving her dead former husband. Is the house itself possessed? Or does Dora’s increasingly fragile grip on reality originate from somewhere far closer to home? Released in the United States as a sequel to Ovidio G. Assonitis’s Beyond the Door, Shock more than lives up to its name, proving that, even at this late stage in his career, Bava hadn’t lost his touch for terror. Now restored in high definition for the first time, the Maestro of the Macabre’s chilling swansong disturbs like never before in this feature-laden release from Arrow Video.

Nightmare and trauma. Fear and repression. Guilt and atonement. Weaving together the emotional violence of horror with the cryptic motifs of German folk and fairy tales, Arrow Video is proud to present Sleep, the debut feature from a major new talent in world cinema. Tormented by recurring nightmares of a place she has never been, Marlene (Sandra Hüller, Requiem) cannot help but investigate when she discovers the place is real. Once there, she suffers a breakdown and is admitted to a psychiatric ward.

Determined to discover what happened to her, Mona (Gro Swantje Kohlhof), her daughter, follows and finds herself in Stainbach, an idyllic village with a dark history. What is it that so tormented her mother, and the people of Stainbach? What is the source of the nightmares she suffers? And who is the mysterious Trude that lives in the forest? Richly conceived and confidently told, director Michael Venus draws influence from Mario Bava, David Lynch, Franz Kafka and the Brothers Grimm, but his voice is uniquely his own. As invested in substance and story as he is in style, Venus claws his way down to the roots of what haunts a people, a community, a nation and comes up screaming. “Will definitely keep you up at night” – Joey Keough, Wicked Horror