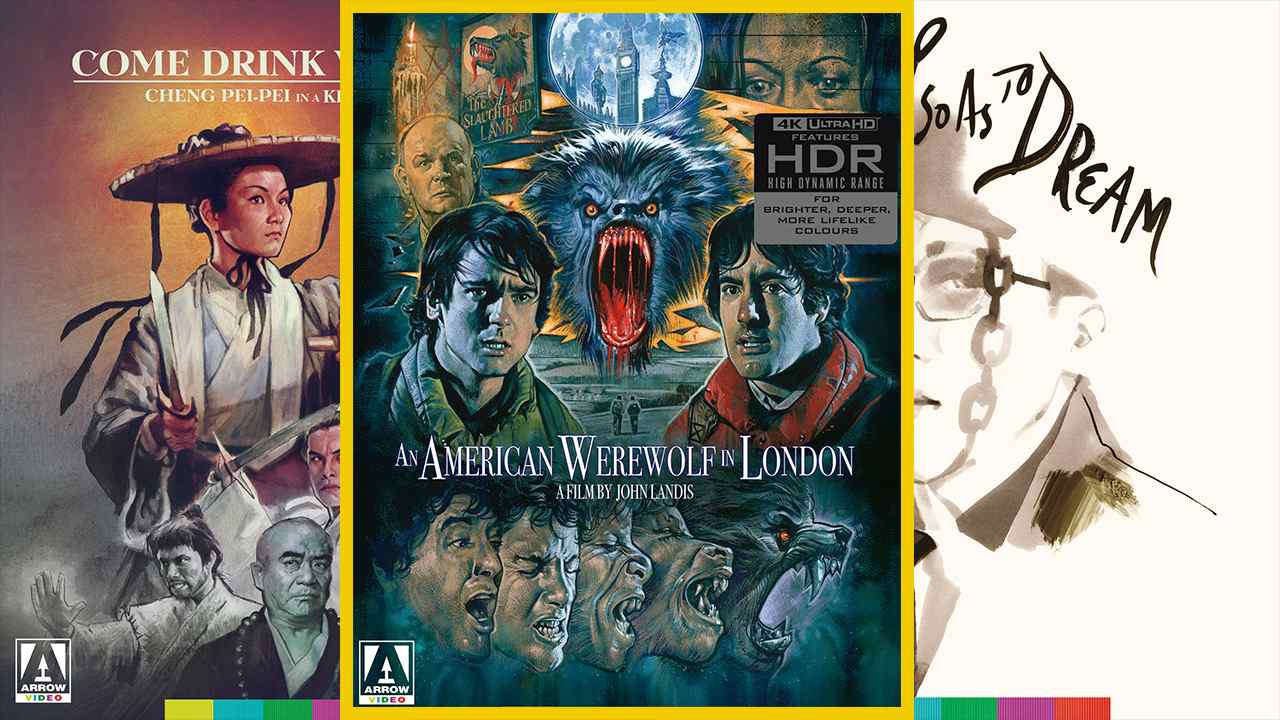 This Spring, Arrow is proud to wow fans of cinema with two new titles making their Blu-ray debuts, while an old favorite returns with an all new 4K UHD release.

On March 15th, An American Werewolf in London bites its way into 4K. Directed by John Landis, this horror-comedy tells the story of two friends (David Naughton and Griffin Dunne) that are viciously attacked by a wolf-like creature while backpacking through England. One friend dies while the other suffers a much worse fate – he becomes a werewolf. Featuring a gnarly and bone-shattering transformation scene, An American Werewolf in London set the gold standard for which all other werewolf films strive to be with Film School Rejects calling “a quintessential horror text when it comes to both lycanthropy and practical effects.” This UHD release includes a brand new 4K restoration completed by Arrow Films from the original camera negative. Special features include documentaries, audio commentaries, interviews, and limited edition 60-page, perfect-bound book featuring new writing by Craig Ian Mann and Simon Ward, archival articles, and original reviews.

Come Drink With Me, one of the most significant martial arts films of all time, comes to Blu-ray on March 22. King Hu’s film about a group of bandits that kidnap the governor’s son and demand their imprisoned leader be set free in exchange helped to catapult martial arts films to the mainstream and launched Cheng Pei-pei as a star. The film is notable for its outlandish action sequences, many of which are choreographed to resemble dance. Hu went on record to state he chose Pei-pei as his female lead because of her background in ballet, noting that his stylized fights were “always keyed to the notion of dance.” This release marks the film’s Blu-ray debut.

Kaizo Hayashi’s acclaimed directorial debut, To Sleep So as to Dream, closes out the month of March with a Blu-ray release on March 22. When her daughter Bellflower (Moe Kamura) goes missing, an aging silent film actress (Fujiko Fukamizu) hires a private eye (Shiro Sano) and his bizarre assistant (Koji Otake) to track her down. This surreal fantasy is regarded as one of the most impressive works of cinema to come out of Japan in the 1980s. Referencing the country’s rich cinematic history and featuring cameos from a host of veteran talent, To Sleep So as to Dream is a must-see for fans of Japanese cinema. The Arrow Blu-ray release will be the film’s first home video release outside of Japan and features a brand-new restoration of the film supervised by Hayashi. Special features include a new audio commentary track, new interviews, and more. The first pressings of the release will include an illustrated collector’s booklet.

Years before Shaw Brothers’ kung fu films made them the biggest film studio in Hong Kong, local audiences flocked to their wuxia pian films: mythic tales of swordfighting (and often gravity-defying) heroes fighting for honor. In his final film for the studio, Come Drink With Me, director King Hu (A Touch of Zen) broke fresh new ground in martial arts storytelling, and catapulted fresh-faced lead actress Cheng Pei-pei to stardom in the process. When the Governor’s son is taken hostage by bandits, a mysterious swordsman named Golden Swallow (Cheng) is hot on their trail to ensure the son’s release.

What the bandits don’t realize, however, is that Golden Swallow is actually a woman, and that the hostage is her brother. Determined to set him free, no matter how many goons she has to fight her way through in doing so, she is aided in her quest by a drunken beggar (Yueh Hua) who may have a closer connection to the bandits’ leader than he initially lets on. Decades before Ang Lee brought the wuxia genre to international attention with Crouching Tiger, Hidden Dragon (in which Cheng played the villainous Jade Fox), King Hu set the original template in what is still considered one of Shaw Brothers’ greatest and most influential action masterpieces.

An American Werewolf In London UHD (1981)

One of the greatest directors of the 1980s, John Landis (The Blues Brothers, Trading Places), expertly combines macabre horror with dark humor in the lycanthropic classic, An American Werewolf in London. American tourists David (David Naughton) and Jack (Griffin Dunne) are savaged by an unidentified vicious animal whilst hiking on the Yorkshire Moors. David awakes in a London hospital to find his friend dead and his life in disarray.

Retiring to the home of a beautiful nurse (Jenny Agutter, Walkabout) to recuperate, he soon experiences disturbing changes to his mind and body, undergoing a full-moon transformation that will unleash terror on the streets of the capital… An American Werewolf in London had audiences howling with laughter and recoiling in terror upon its cinema release. Landis’ film has gone on to become one of the most important horror films of its decade, rightly lauded for its masterful set-pieces, uniquely unsettling atmosphere and Rick Baker’s truly ground-breaking, Oscar-winning special makeup effects. Now newly restored and presented with an abundance of extra features, this big beast of horror can be devoured as never before…

Two private detectives hunt for an actress trapped within the reel of a silent ninja film in the dreamlike debut of Kaizo Hayashi (Circus Boys, Zipang), a magical double-handed cinephilic homage to the movie worlds of the 1910s and 1950s. When private eye Uotsuka (Shiro Sano, Violent Cop, Shin Godzilla) and his sidekick Kobayashi are approached by an aged former actress, Madame Cherryblossom, to go in search of her kidnapped daughter Bellflower, their investigations lead them to the studios of the mysterious M. Pathe company.

Here Uotsuka has a strange vision in which he comes face to face with the beautiful star of a 1915 chanbara film that appears to have no ending. From then on, things begin to get a little strange… Among the most impressive and critically regarded Japanese films of the 1980s, To Sleep so as To Dream finally makes its home-video debut outside of Japan in a brand new restoration supervised by the director himself. Drifting between illusion and allusion, it is chockfull of references to Japan’s rich cinematic heritage and features cameos from a host of veteran talent and baroque sets created by Takeo Kimura, the Nikkatsu art designer fondly remembered for his flamboyant work with Seijun Suzuki in the 1960s.