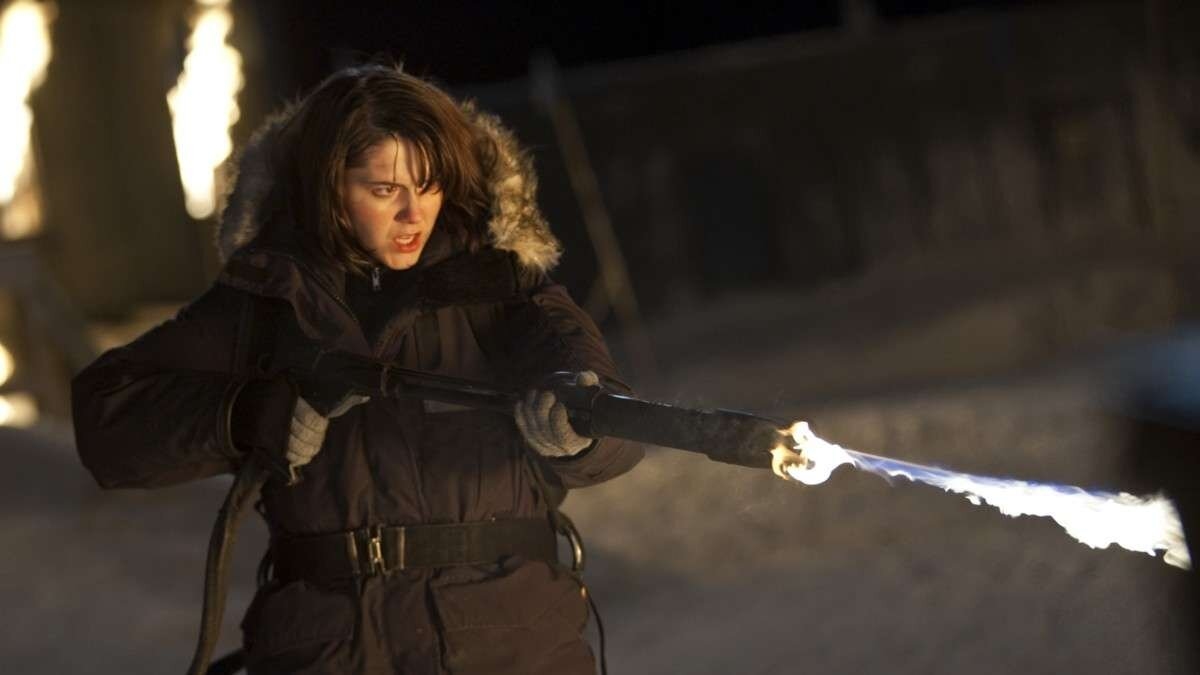 When it comes to horror movies, bigger isn’t always better but less is almost always more. In The Thing, we still get a decent helping of thrills, but the changes to the creature, the revealing of its natural state and the expansion of its mythology detract from the overall terror. Seeing more of the alien being has its advantages in the visual department, yet it also removes much of the paranoia. It also leads to plot holes and an abundance of quandaries. The larger, more vicious monster paired with a sizable cast of victims does result in a few exciting scenes of slaughter, but the swap of visual effects for actual suspense isn’t a wise trade. Bigger might be easier, but it’s definitely less memorable.

When an alien life form and its spaceship are found frozen beneath the ice in Antarctica, paleontologist Kate Lloyd (Mary Elizabeth Winstead) is called in to help extract it. The headstrong scientist in charge of the dig site, Dr. Sander Halvorson (Ulrich Thomsen), opts for personal glory over safety and insists on taking a tissue sample from the creature. When the monstrous beast unexpectedly thaws and escapes its icy prison, fear and suspicion begins spreading amongst the group of scientists and researchers as one by one they are overtaken by a being that can mimic the appearance of anyone it kills.

The Thing is hiding under the guise of “prequel,” but in actuality it’s as close to a remake as a movie can get (the coincidence of identical extraterrestrial attacks befalling two separate geological research stations during the same year is absolutely preposterous). The filmmakers have analyzed every element of the John Carpenter version and decided which pieces to alter, replace or update. Unfortunately, they made all the wrong choices. Instead of a hardened, bearded, calculating man, they’ve substituted a young, pretty woman seemingly incapable of toting heavy weaponry, hopping through obstacles, dissecting slimy monstrosities and killing people – yet she does each without missing a beat. Rather than using mostly practical effects, fully computer generated baddies scurry about, which look much less realistic. And in place of minor vulnerabilities that make it fundamental for the creature to stay hidden, this new alien is more colossal, more powerful, faster, furbished with sharp appendages and toothy constituents and not afraid to galumph about (like a particular Jurassic Park inhabitant) in its mutated form.

The Thing resorts to typical horror movie gimmicks since it can tout no originality. We’re given jump scares, a disaster-packed opening scene, the snatching of victims from the dark, over-the-shoulder camerawork, oodles of gore, and entirely too many characters (making potential targets nearly indistinguishable). There is still a sense of distrust, paranoia, isolation, claustrophobia, and a notable amount of suspense, but the derivations, contrivances, and pointless alterations to the 1982 version are overwhelming. It would be marginally effective if the filmmakers could somehow prevent audiences from seeing Carpenter’s near perfect horror movie (itself a remake).