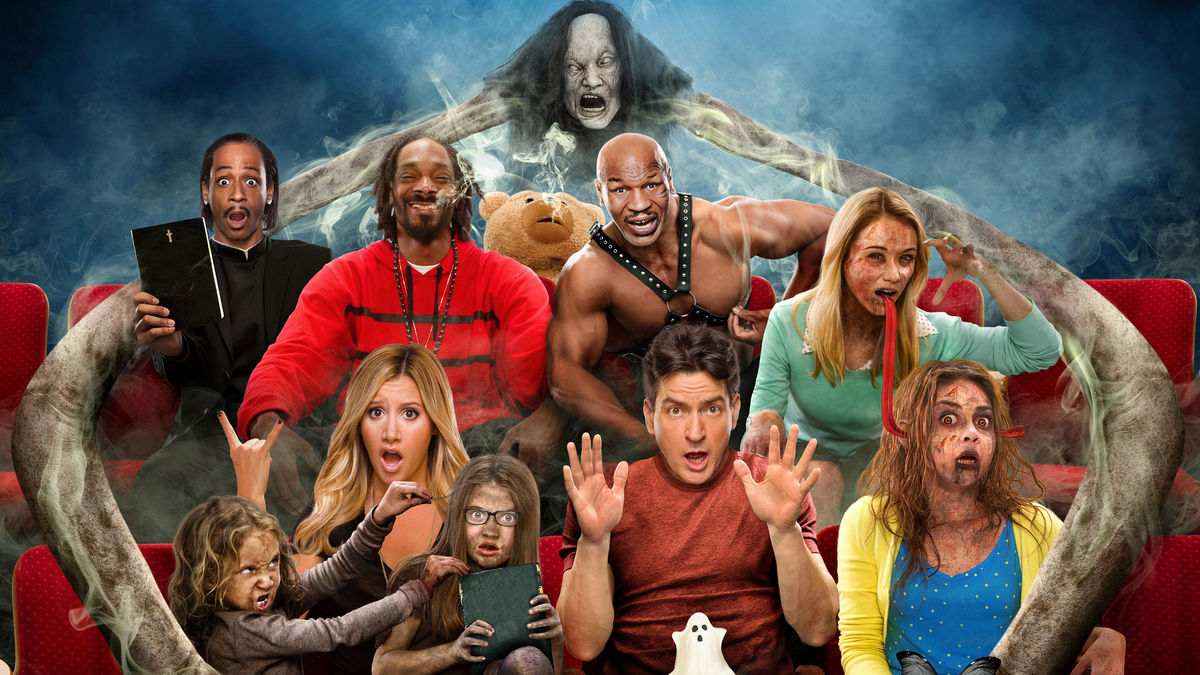 “Scary Movie 5” is the latest installment of the “Scary Movie” franchise. True to previous films, “Scary Movie 5” is full of camp and pop culture parodies. The movie centers on the Sanders family, a young couple with a newborn son and big dreams for their lives in the city. Jody is a perfectionistic ballet dancer, and Dan is a well-intentioned but oblivious researcher studying primate intelligence.

At the beginning of the movie, Charlie Sheen and Lindsay Lohan are shown filming an absurd fully clothed sex tape. Shortly after the conclusion of filming, paranormal events start taking place, ending in Sheen’s death and Lohan’s prosecution for his murder. Sheen’s three children mysteriously vanish, only to turn up later in a cabin in the woods. The children are feral, and they are placed under observation until they are fit to live with a family. Charlie Sheen happens to be Dan Sanders’ brother, and the couple agrees to take custody of their nieces and nephews under the condition that they all move into a large suburban home.

Strange events start happening around the children who regularly interact with an unseen spirit they call “Mama.” At first, Jody, (Ashley Tisdale) is reluctant to take on a mothering role with the three children, but she soon becomes concerned for their welfare and starts investigating the paranormal activity that surrounds them. Jody and her best friend, Kendra, begin a journey to learn about the occult and stop the supernatural force that is threatening the Sanders family. Along the way, they enlist the help of a son of an exorcist, Jody’s nightmare mother, and an ancient sacred text.

“Scary Movie 5” comes with all the pop culture references, slapstick humor, and crude jokes that fans of the “Scary Movie” franchise have come to expect. The story starts out at a point of action with Sheen’s appearance as himself, and then it simply continues with the apparent aim of trying to shock and entertain.

While the film does follow the standard campy format of a satire horror film, “Scary Move 5” is not without its touching moments. Although Jodie is reluctant to care for her nieces and nephews at first, she soon discovers a nurturing side of herself that she didn’t know was there. Her relationship with her own mother is to blame for her cold demeanor at first, and she realizes that she doesn’t want to follow in her own mom’s footsteps.

Jody’s relationship with Kendra is another heartwarming aspect of the movie. Kendra is bold and outrageous at times, and she is always ready to lend a laugh when things get tense. Jody and Kendra’s close friendship is admirable and serves to move the plot along on more than one occasion.

Dan, played by Simon Rex, is another hilarious character. Dan is a bumbling scientist who spends most of his time working in a lab with the goal of increasing the intelligence of his primate subjects. Dan’s laboratory story arc is a parody of “Rise of the Planet of the Apes,” and his primary subject is an extraordinarily intelligent primate named Caesar. Caesar is actually much more intelligent than Dan, but because Dan is so oblivious, the scientist remains unaware of his subject’s progress.

“Scary Movie 5” is reasonably current in its references, including such recent film parodies as “Evil Dead,” “Rise of the Planet of the Apes,” “Mama,” and “Fifty Shades of Grey.” Horror films that are parodied include “Insidious,” “The Cabin in the Woods,” “Sinister,” and, of course, the “Paranormal Activity” franchise. In fact, “Scary Movie 5” is primarily based on the main premise behind “Paranormal Activity.” In the house in which Jody and Dan are required to raise the kids, there are multiple security cameras set up to document any paranormal activity that occurs in the house. The children are seen talking to an invisible spirit they call “Mama” that seems to have mysterious and evil intent. Multiple characters are picked up and thrown around by a poltergeist. Fans of the “Paranormal Activity” franchise may enjoy this irreverent take on the unconventional movie format that specializes in jump scares and tension building.

All My Friends Hate Me (2021) Trailer – Directed by Andrew Gaynord