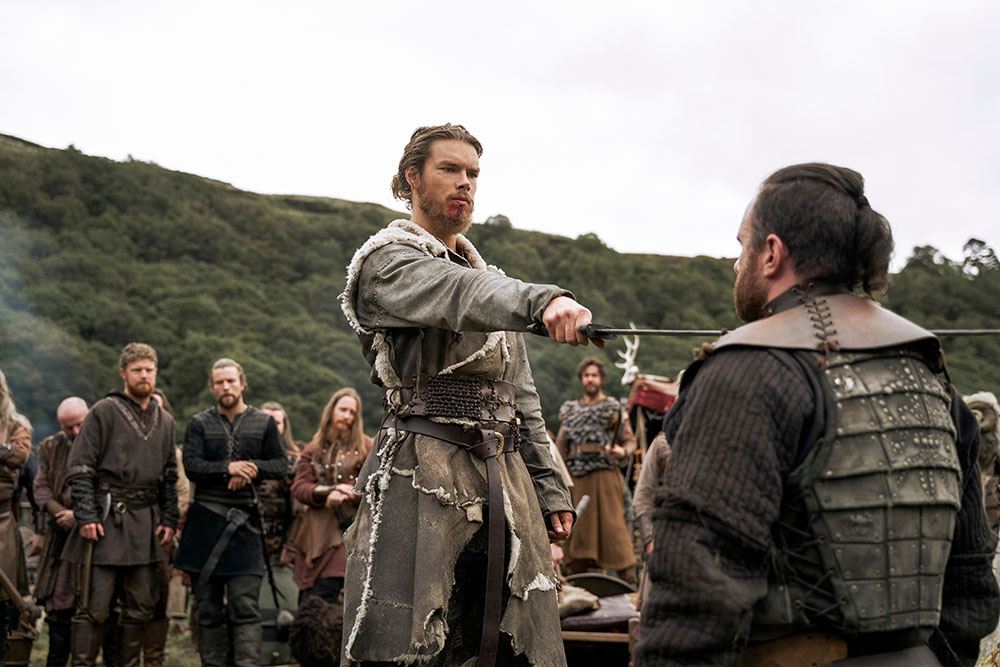 When Vikings: Valhalla charges onto Netflix on Feb. 25, more than a hundred years will have passed since the events of the original hit series. That means a whole slew of new characters, new battles and, most importantly, new stakes to entice new fans. But behind the scenes, there are also a few similarities the upcoming historical drama shares with its predecessor.

“We’ve been lucky to have so many creative minds from the original show return for Valhalla — from our producers to many of our crew,” showrunner Jeb Stuart says. “I think original fans of the Vikings show will find a lot of key elements that are similar; the accuracy, the depth of the characters, the suspense, the terrific action.”

Ahead of the series premiere, Stuart and executive producer Morgan O’Sullivan, who was also an executive producer on its predecessor, explain the genesis of Valhalla, the real-life inspirations for the central characters and why the Viking age continues to enthrall fans.

Can you talk about where the idea for Vikings: Valhalla came from?

Jeb Stuart: Morgan approached me about three years ago. I also knew Michael Hirst, the creator and writer of Vikings. They both made it clear that they didn’t want to do another season of the previous show, but that they wanted to push the story into the future, and asked me to figure out a home for that narrative.

Morgan O’Sullivan: Michael Hirst was the sole writer on Vikings. He wrote 89 episodes and, understandably, was ready to do something else. But he said that if we ever decided to continue the story, he would still be involved. I started to look for someone who could move into a role similar to Michael’s. Jeb and I were working together on a series called The Liberator, and I was so taken by him. I also knew that the remarkable movies he has written, like The Fugitive and Die Hard, marry action and character so well, which is exactly what we wanted to do in Valhalla.

Can you walk us through when and where Vikings: Valhalla is set?

Stuart: Setting the story in 1002 gave me a really good starting point to get the ball rolling. We return to familiar settings like Kattegat, and also explore entirely new settings and lands. The story this season starts with a particular historical event that happened in 1002, over 100 years after the end of the original Vikings show. The Vikings had been living in the British Isles and had settled into big areas called the Danelaw. The Danelaw had started to grow — not just with Danes, but also with Swedes, and Norwegians, and folks from all over Scandinavia. This had become a problem for the Saxon king, King Aethelred II of England. Saxon nobles were afraid that, if you went out another generation, suddenly there wouldn’t be any difference between Saxons and Vikings. At the same time, back in Norway and Denmark, the Viking groups were in an undefined religious civil war with each other.

This season centers around three key new characters who are all based on real historical figures. Can you walk us through who they are?

Stuart: We meet Leif Eriksson, the famous Viking explorer who eventually becomes one of the first Europeans to set foot in North America, and his sister, the fierce pagan warrior Freydis Eriksdotter. We also follow Harald Sigurdsson, who becomes Harald Hardrada, one of the last great Viking kings. The three of them become triumvirs through which we weave the story. For me, they each embody different elements of the Viking spirit. Bringing Leif and Freydís — who are both Greenlanders — to Norway, to Kattegat, and embedding them in the Viking story just seemed a very natural place to go. That’s where their journey starts, and where they both meet Harald.

How did you research Viking history and toe the line between fact and fiction?

O’Sullivan: ​​On Vikings, one of the most important people working on the show was Justin Pollard, our historical consultant. Justin did all of our research and he was invaluable to Michael Hirst. When we started Valhalla, it was imperative that Jeb meet Justin Pollard. They had many months together before the writing even started, and that was an invaluable period of time.

Stuart: When I first got the call asking if I would like to continue and expand this story, I knew what any other viewer knew. I began absorbing everything I could get my hands on. We don’t know a whole lot about the original Vikings — they didn’t have a written language, so the documentation is tricky. They left us the sagas, but the sagas were written 200 years after the end of this story, and they were written by Christians. We know archeologically what has been dug up, but we’re still discovering new things about Viking culture. Ultimately, we’ve made an authentic show. Sometimes we’ve moved dates or characters around a bit, but the historical pieces are all there.

What do you think it is about Viking culture and stories that still excite and captivate us?

Stuart: In a strange way — if you take massive violence out of the equation — the Vikings embody some of the elements that we still most want for ourselves. They were great explorers. They were often very inquisitive and open to learning. They were an egalitarian society. Women could not only divorce their husbands, they could also rule kingdoms and own property. If you could earn it, you could take what you wanted from life. It’s a timeless story. Our characters are dealing with relationships and issues that are just as relevant today as they were a thousand years ago, and those stories will always excite and captivate us.