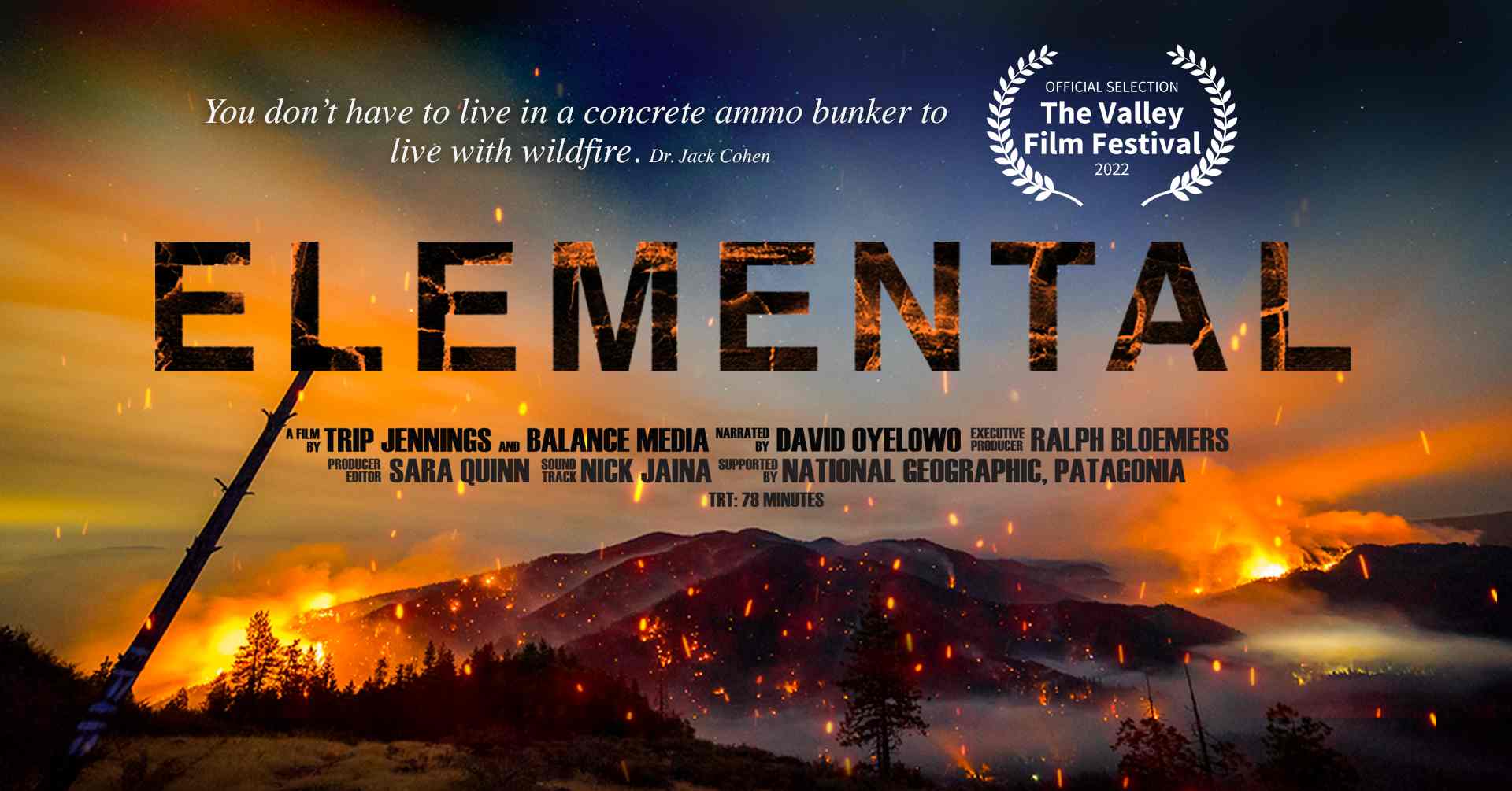 VFF’s evergreen theme of “Community + Culture” is reflected not just in VFF’s all-local sc reenings and events, but across all eight features selected from around the world and the U.S. These include: an Australian roadtrip film, a U.S. love story set in the afterlife, an Indian-Muslim-South African stand-up comedian’s story, a U.S. comedy set in the candy world, and a David Lynch-like noir film set in the desert.

VFF also selected three “true life” films reflecting community: a Civil Rights gospel singer’s bio-pic and two timely documentaries. One portrays the pandemic ravaging an L.A. restaurant, whereas the other shows how to help communities withstand super-fires. Elemental (below) is narrated by NAACP Award Winner David Oyelowo (MLK in Selma), who will provide a special video-introduction for this Documentary Centerpiece film. “This was a particularly strong year for feature-film entries, reflecting the world’s challenging times,” said VFF Director Tracey Adlai, who founded the festival 22 years ago.

Tracey added, “Filmmakers are finally back in theatres with their sense-of-community and we look forward to this, too. As always, we’re celebrating the ‘818’ and our festival’s affordable $8.18 entry point allowed films to be entered from around the world. We’ll once again laugh and weep as one.”

The eight selected feature films, their loglines, and screening times at the Laemmle Noho 7 (5240 Lankershim Blvd., North Hollywood, CA) are listed below:

Silent River (2021) – Directed by Chris Chan Lee. USA. (Multi-award-winning film both at festivals and for the actors’ performances). On the road in a desperate attempt to reunite with his estranged wife, Elliot takes respite at a desert motel. He encounters Greta, a mysterious woman bearing a striking resemblance to his wife. Elliot soon discovers Greta’s secret and descends into a mind-bending journey that forces him to question who she is and where they are. Cast: West Liang, Amy Tsang. The feature also features a stunning score by Brian Ralston with musicians Andrew Duckles (Top Gun: Maverick) & Phil O’Connor (Mandalorian).

Two Dash One One – Directed by Valley Film Festival alum Nate Hapke. USA. (World Premiere). After being torn apart by a tragic accident, two young lovers are forced to reexamine their relationship when they are reunited in the afterlife.

Remember Me – The Mahalia Jackson Story – This bio-pic portrays the life of gospel singer Mahalia Jackson, her rise and challenges in the music industry, her unbreakable bond with Dr. Martin Luther King, and her dramatic impact on the Civil Rights Movement.

Belle Vie (2022) – (Beautiful Life). Directed by Marcus Mizelle. USA. This documentary portrays a beloved Parisian-style bistro “Belle Vie,” located in a L.A. neighborhood between a McDonalds and KFC. The restaurant is owned and operated by charming hopeful French immigrant, Vincent. As business booms, a fulfilled Vincent provides “community” to his neighborhood — until the Covid-19 pandemic hits. It sends him (and all of us) for a loop …

New Material (2020) – Directed by Craig Freimond. South Africa. Cassim Caif (Riaad Moosa) is a young Muslim man living in Johannesburg. He is balancing the demands of a new marriage, a young child, and living in a house with his aging parents, with being one of South Africa’s few Muslim stand-up comedians. Cassim decides to take his act on the road…

The Marshmallow Mystery Tour – USA. L.A. premiere. Directed by Jeff Beals, Matt Beals. After landing a gig at a marshmallow theme park, a cameraman uncovers the shocking truth about America’s candyland and his own sugarcoated childhood.

The Road To Perth (2020) – Rejected after a marriage proposal, Alex finds himself alone on a journey from L.A. to Australia – on what was supposed to be his vacation with his fiancée. Stuck in a state of shock, Alex crosses paths with Ronnie and together they take a road trip to Perth.

You Should Prepare Well For Casting Calls to Get a Chance

About The Hollywood Film Industry

Do You Need to Move to Hollywood to Work in the Film Industry?

Priyanka Chopra Strikes Out in Hollywood

Marilyn Monroe and the Silver Screen of the 1950s