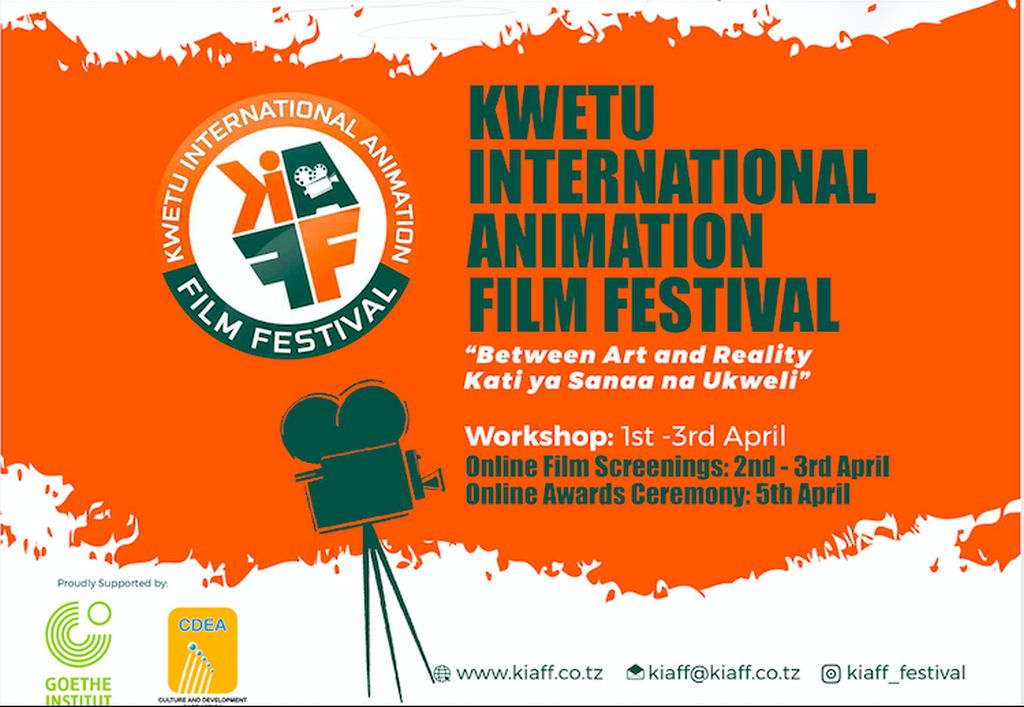 The Kwetu International Animation Film Festival (KIAFF) is an exciting new arrival on the African festival landscape. This East African based festival focuses only on animation with the first edition kicking-off online from APRIL 2ND to 3RD, 2021 with 50 animation works from around the world.

KIAFF is a 2 days festival that will showcase quality animation films from around the world, including features (longer than 45 minutes), shorts, TV commercials and with a focus on Made in Africa, films made by African animators in Africa. Various Awards will be presented by the jury, made up of, Prof Martin Mhando (Tanzania), Fred Lyons  (Australia) and Fibby Kioria (Kenya) on Monday April 5 live on Zoom.

Animation fans from all over the world will be able to watch the films via KIAFF’s streaming partner, NuellaTV and also to vote for their favourite animation for the Audience Choice Award.

The festival also includes a workshop on 1st to 3rd April, “Writing for Animation” taught by Anaeli Kihunrwa from MediaOne. In future editions KIAFF will organize forums as well as an exhibition and conference in Dar es Salaam, Tanzania.

The festival will run online via KIAFF partner, NuellaTV and all films will be free to watch for those in East Africa,  (Kenya, Tanzania, Uganda, Burundi, Rwanda and South Sudan). For those outside of Eastern Africa a once off ticket price of $10 will enable access to all the films over the two days.  To watch these films go to: https://nuel.la/iTa2jT

The theme for the inaugural edition of KIAFF is Between Art and Reality/Kati ya Sanaa na Ukweli:

BETWEEN ART AND REALITY

Art and reality have a very contentious relationship. Art does not really rely on reality to communicate about life but foregrounds the imagination to bring along the viewer, the spectator or participator into any art-form. However, the end of art’s journey is to make humans gain that kind of knowledge that makes life meaningful, making art and reality partners to life.

Festival Founder and Director, Daniel Nyalusi has this to say of the role that KIAFF will play in the African film environment, “Technology has changed and now it allows for animation filmmakers to make more films also there is a need for more initiatives in East Africa that helps/pushes animators to produce more films. Animation films have been loved and still loved by children and family hence its audience is permanent so filmmakers must be more creative and feed the market. Kwetu International Animation Film Festival (KIAFF) will be the platform and the only place that will bring together animation filmmakers and stakeholders including the corporate companies that uses animation for advertisement. KIAFF will be organized every year in April and also organize training workshops throughout the year.  The aim of KIAFF is to become the centre and the HUB of Animation film industry in East Africa.”

This festival is created for the public to socialize and also developed into a place of intercultural exchange and a platform for the critical animated cinematic exploration of social and development issues. It will discover and develop new animation talents to East Africa and the global and accompany them on their path into the spotlight and support their careers, visions, projects, dreams and works.

KIAFF is the new HUB for animation cinema in East Africa.