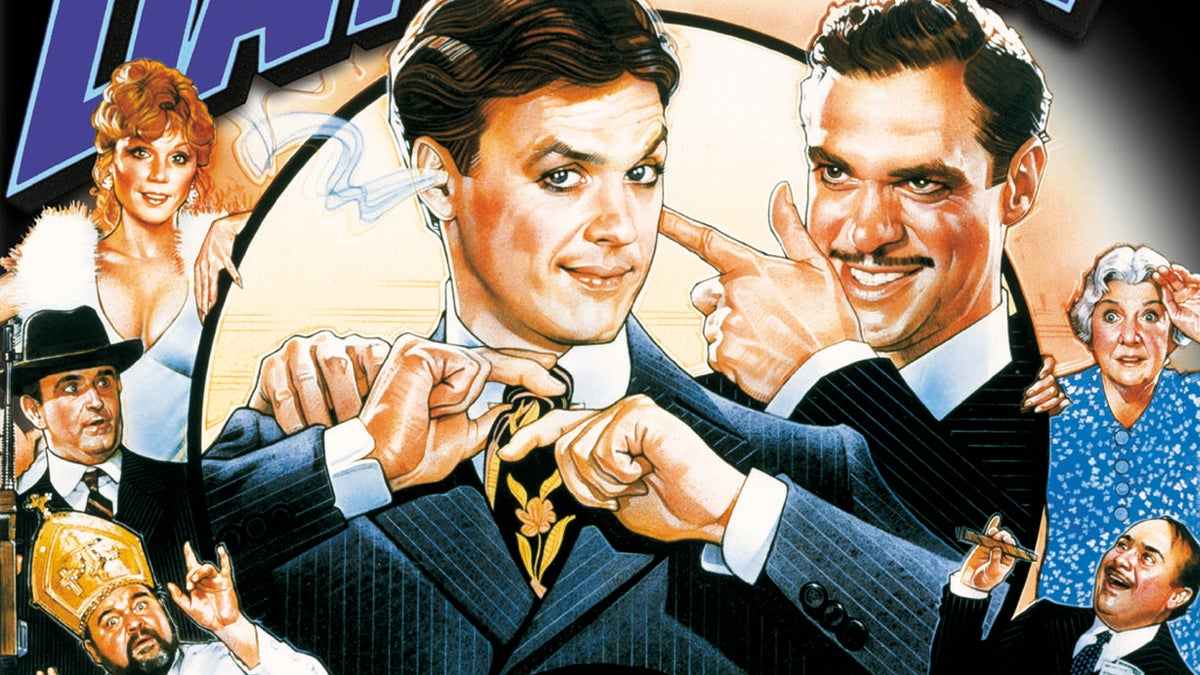 One of the more under-appreciated comedies of the 1980’s, Johnny Dangerously seems to have slipped under the radar of the majority of the movie viewing public.

But this is a true gem of a comedy created in the spirit of cult hits like Airplane and The Naked Gun. Sporting an all-star cast, and an endless number of hilarious scenes and one-liners, Johnny Dangerously is one of my favorite comedy films of all time. Michael Keaton is at his best in a comedic role (much like Tom Hanks before he too moved into more serious roles).

Joe Piscopo also turns in one of his most memorable movie appearances, but the show stealer is little known actor Richard Dimitri in his portrayal of Roman Moronie – that fargin ‘bastage can really act!

Set in the 1930s, an honest, goodhearted man is forced to turn to a life of crime to finance his neurotic mother’s skyrocketing medical bills. – Imdb.com

Set in the 1930’s, Johnny Dangerously follows the life of Johnny Kelly (Michael Keaton), an honest, All-American boy who turns to a life of crime in order to help pay for his mother’s ever-mounting medical bills. When local gangster Jocko Dundee (Peter Boyle) has his butt saved by the enterprising young paperboy, he gives him the nickname Johnny Dangerously and hires him to work as courier in his operation. Boyle, a superb actor in his own right (Honeymoon In Vegas and Everybody Loves Raymond), has several great one-liners, and right from the start, this movie is scene after scene of laughs …

As the years pass, Johnny works his way up in the Dundee gang, which wages a constant turf war with the immigrant mobster Roman Moronie (Richard Dimitri). However, when Jocko is assassinated, Johnny is appointed to take his place, prompting inter-gang rival Danny Vermin (Joe Piscopo) to form his own gang in direct competition to Johnny. The situation is further complicated when Johnny’s little brother, Tommy (Griffin Dunne), rises to the position of Attorney General, vowing to take on mobsters like Johnny Dangerously. When Danny Vermin finds out that Johnny and Tommy are brothers, he uses the information to his own advantage – threatening to ruin Johnny and all he holds dear …

Featuring a brief appearance by Danny DeVito, and Marliu Henner starring in a supporting role, Johnny Dangerously is packed with top-tier talent. Well written, and absolutely hilarious, the film is another comedy classic for director Amy Heckerling (Fast Times At Ridgemont High, European Vacation, Clueless, and A Night At The Roxbury). The laughs are endless in Johnny Dangerously, which is filled with scenes such as the one where Michael Keaton gives his mob buddies a pep talk about the need to compete against “low-cost, high-quality Japanese gangs” and Joe Piscopo’s warning to not hang him on a hook, because his “sister hung him on a hook once … Once!”

The key to Johnny Dangerously’s success is the performers and their ability to deliver the lines with absolute perfection. A cast with lesser experience in the realm of comedy would have made this movie a footnote in history. Instead, Johnny Dangerously turned out to be one of the top comedies of the decade. If you haven’t seen it (and a lot of people haven’t even heard of it), then I highly recommend that you watch Johnny Dangerously. It’s quite simply one of the funniest films ever made, and it’s definitely a must-see …