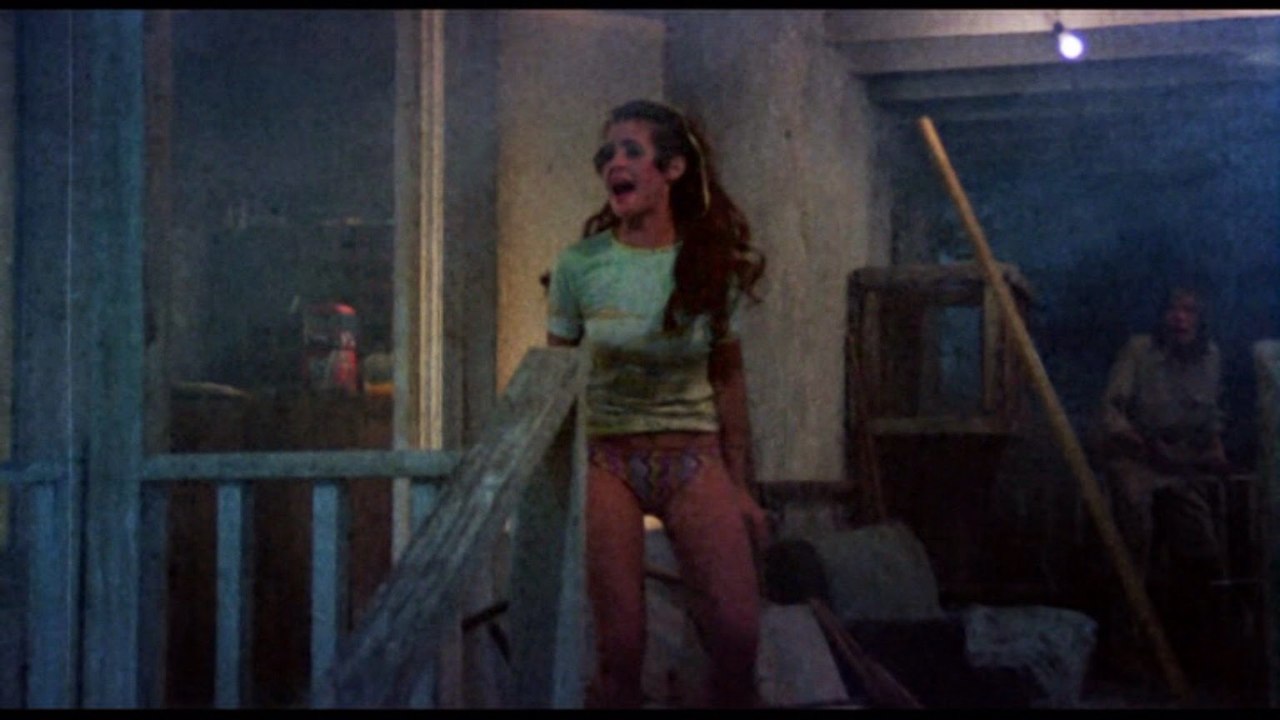 Robert Englund plays an extremely obnoxious fellow named Buck, who has a very funny line at the beginning of the film. When he’s talking to the unfortunate prostitute Clara Wood played by Roberta Collins. He says to her, “I’m Buck and I’m ready to f ** k,” to Clara the aspiring prostitute.

Clara makes her way to the run down hotel and meets the local town weirdo, Judd (Neville Brand) who for some reason not explained in the Eaten Alive film does not like Prostitutes. In realizing she’s one, he goes into a violent rant. Judd kills Clara by stabbing her several times with his pitchfork and feeds her to his pet Nile Crocodile.

Soon afterwards a couple that have been been arguing with each other, Faye (Marilyn Burns) and the disturbed Roy (William Finley) arrive at Judd’s crappy hotel surrounded by a swamp along with their young daughter Angie (Kyle Richards).

I really hate this part of the Eaten Alive movie, because after their daughter’s dog is eaten by Judd’s crocodile, Angie the young daughter almost ruins the film with her extremely annoying crying. The couple takes Angie into the room they checked into at the hotel and try to calm her down. The couple resumes arguing with each other. 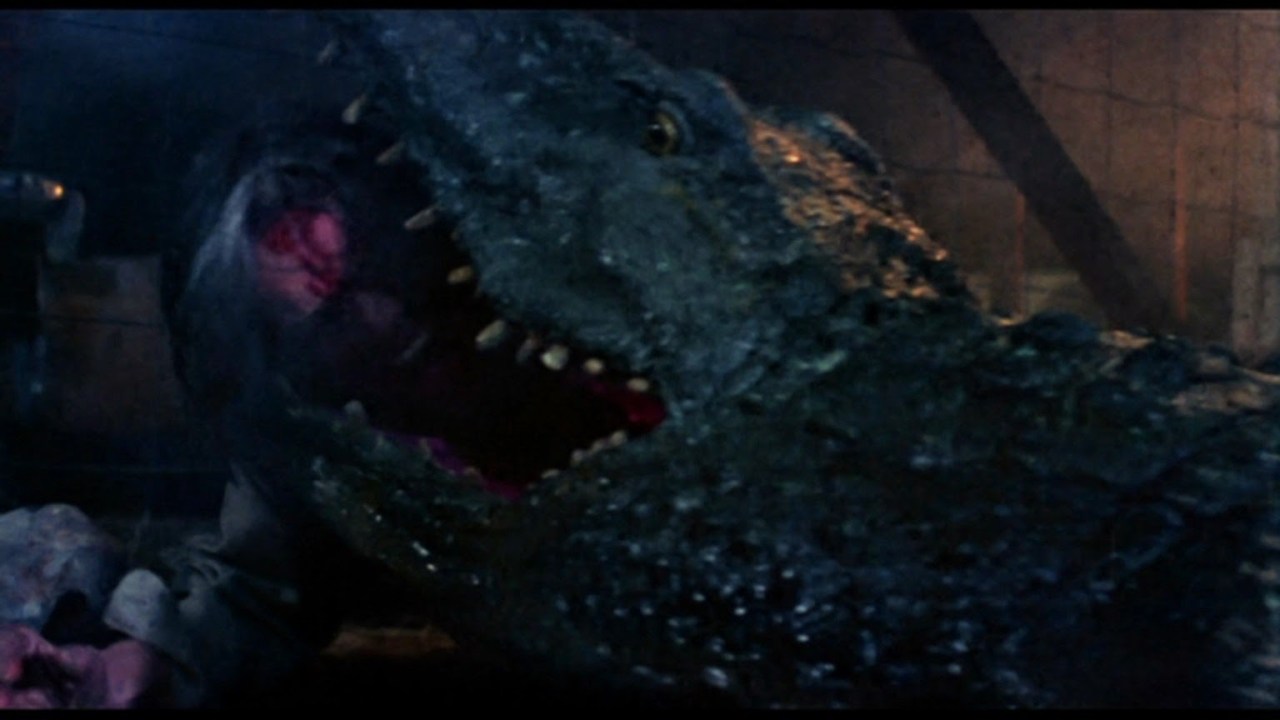 Harvey and Libby make their way to the brothel to see if Clara is there. Meanwhile, back at the hotel Roy decides to shoot the crocodile and is then promptly stabbed several times by Judd with his Scythe and fed to his Crocodile.

Faye puts Angie to sleep and then goes to take a bath. She is then beaten up and bound to the bed by Judd. Little Angie flee’s from Judd and hides underneath the hotel. Harvey Wood and his daughter Libby along with Sheriff Martin (Stuart Whitman) head back to Miss Hattie’s Brothel and asks her about Clara. Madam Hattie denies ever seeing Clara.

Libby leave’s her father Harvey and heads to the local hot spot, the bar with Sheriff Martin. Harvey then gets killed by Judd when he returns to the hotel after hearing Angie’s crying. He is then eaten by Judd’s crocodile, while Sheriff Martin and Libby are at the local bar.

Buck “The Alpha Male” is also there with his girlfriend and is bullying some other guys. Buck is confronted and kicked out by Sheriff Martin. Buck and his trashy girlfriend go to Judd’s hotel. Buck was already warned not to come back there earlier in the film by Judd. Judd doesn’t like Buck for unexplained reasons.

While Buck is in his room with his girlfriend he hears some crying from nearby. Buck goes to investigate and is attacked by Judd. He is pushed into the swamp and eaten by the Crocodile. Libby arrives back to the hotel and discovers Faye tied up. She unties Faye from the bed. Judd opens up the gate to the swamp to allow his crocodile free access to eat the young girl Angie. Faye and Libby attempt to leave.

Judd chases after them and wounds Faye with his Scythe. Libby escapes and helps Angie get free and out of the swamp. He struggles to get at Libby and Angie who are on top of the fence that makes up the crocodiles swamp cage enclosure. Judd falls over on the crocodile’s side of the cage and is eaten by his crocodile. The Sheriff arrives and the movie ends with some more of Angie’s horrible annoying crying. Judd’s artificial leg pops up on top of the bloody water.

Overall I thought this film was very entertaining. I feel it should have garnered the same respect that Tobe Hooper’s earlier film, The Texas Chainsaw Massacre received. Neville Brand was a riot as Judd. I love the bizarre and funny facial expressions he makes throughout Eaten Alive.

Neville Brand is a great character actor and with the Eaten Alive film he is very believable as a local town loon. The scene where he is sitting on the bed and slurringly singing a tune with these lyrics, “Ain’t got no ticket, ain’t got no bag”. Simple scenes such as these and when he is talking / ranting to himself are highlights of him in the Eaten Alive movie.

I also like his surprised reactions when people ask him something, “Oh! Oh!”, He responds with. He makes the Eaten Alive film campy and entertaining with his great ability to get into the character.

Neville Brand looks so lost in his own world and crazy in those scenes and throughout the Eaten Alive film. Robert Englund is very memorable in this film and you can see the raw talent he had back then as he would soon become a Horror and B-Movie icon.

I don’t recognize the actress Roberta Collins who played Clara, but she sure did an excellent job appearing genuinely scared and looking very uncomfortable before her character was killed by Judd.

I own the 2-Disc Special Edition of Eaten Alive, it is restored and remastered somewhat. The Eaten Alive film is so grainy and the filming process so primitive it comes out on screen being very dark and without some detail.

Due to these harsh conditions Eaten Alive was filmed under, I doubt it would look much better on Blu-ray, whenever they release it in that format. The second disc has several features, including interviews with Robert Englund, director Tobe Hooper, and Mariyln Burns discussing their experience filming Eaten Alive.