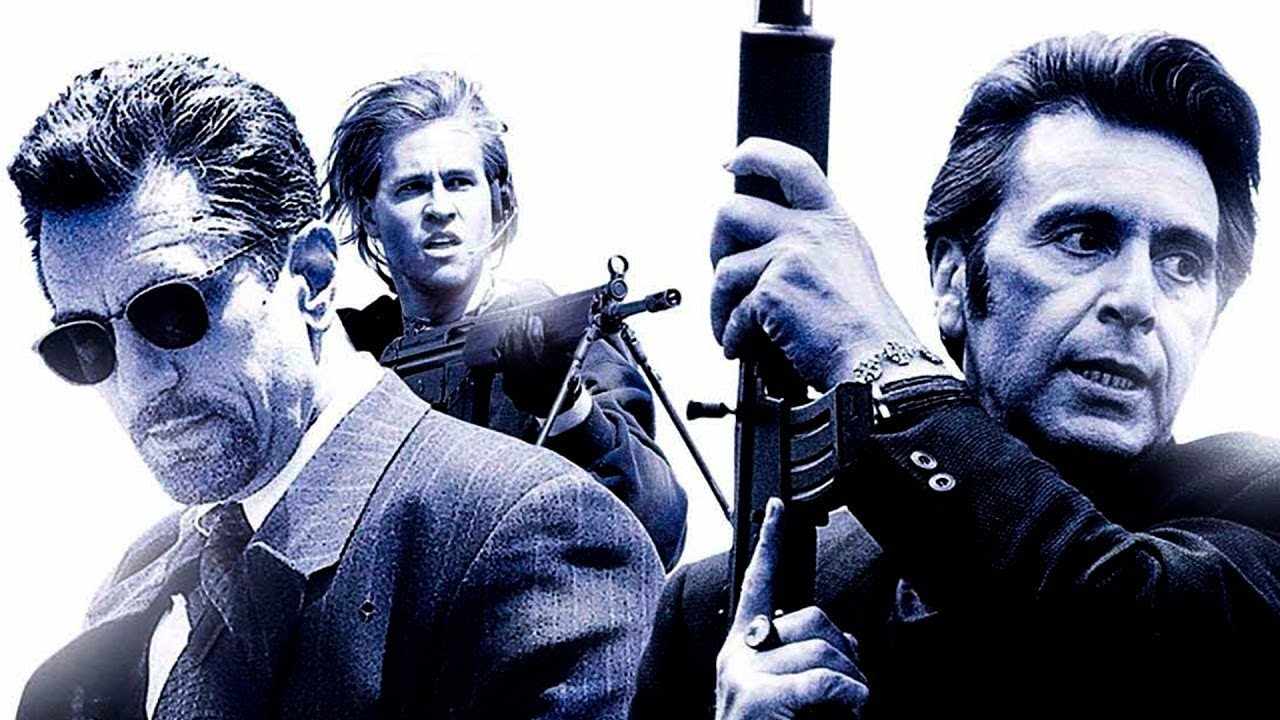 ‘Heat’ tells the epic crime story of Neil McCauley and Vincent Hanna, two men on the “flip side” of a coin, either side of the law.

Neil McCauley (Robert De Niro) is a career master thief who leads a tight ‘crew’ of professional armed thieves who ‘score’ massive money, back jobs. Vincent Hanna (Al Pacino) is the equally expert LA detective who takes down these ‘scores’.

Neil and Vincent become the ultimate adversaries whose commitment to their jobs has consumed them, and made them both comparable and contradictory to each other. They both need each other equally, both sealed off from, and in no need off, a material outside world, operating outside of normal society, more involved and fixated with each other than anything else in their lives. Both men are so obsessed and dedicated to their craft that they are both utterly devoured by it, leaving a trail of devastation and dysfunction amidst the ruins of their almost solitary existence. They are both surrounded by their respective ‘crews’ but are entirely alone as their compulsions have created a complete disconnect from the world outside of the trappings of a career that requires extreme obsession and no small measure of paranoia.

Neil has one specific reason for this separation; “Don’t let yourself get attached to anything you are not willing to walk out on in 30 seconds flat if you feel the heat around the corner.” The ‘Heat’ he refers to is the pursuit from his soon to be nemesis; Vincent, and to stay free and ahead, he must abide by his own rules.

Vincent has failed at trying to live an existence within the accoutrements of a normal family life, a deteriorating marriage on top of previous failed marriages and a step daughter (Natalie Portman) on the periphery who is already having pre-teenage issues and feelings of rejection from her own absentee father. Vincent has more commitment to his job than anything else in his life and everything else suffers from the fallout of the obligation he must give to pursuing high-end, urbane criminals like Neil. Vincent illustrates that to be completely devoted to one all-consuming cause, everything else must suffer.

Neil has no connection to anything else in his life, and so operates with clarity which has kept him ahead of the game for so long, and when Vincent does briefly catch up with Neil, he asks the question of his crew as to why they haven’t seen him before, most likely due to Neil always being ahead of the curve, as he has not allowed himself the indulgences of lifestyle and relationships.

It is when Neil meets Eady (Amy Brenneman), and when Vincent’s relationship with wife Justine (Diane Venora) worsens that a reversal occurs, which clearly demonstrates once more how the trappings of everyday life and the want to build relationships and a desire for something normal, is incompatible with the total devotion needed by their chosen careers. It is here that the women of ‘Heat’ are central; strong in their obligation to their men but equally detrimental too them both in what are reasonable everyday requirements of their men; Neil and Vincent simply cannot provide, for any commitment they have is to their job and any attempt they have, or will make to strike a balance, is futile. Neil finds it more and more difficult to “feel the heat” around the corner as Vincent slowly closes on him, as Neil begins to disobey his own rule when he falls in love with Eady; is he to uphold his view of walking away in thirty seconds flat and sacrifice the love he has found?

‘Heat’ tells a tragic tale better than any other movie of its type and nothing comes close to the scale of ‘Heat’ in telling a story so rich and in depth of characters, with Neil and Vincent central to everything and all others fall-in and fall-out around them.

Neil leads a crew of thieves who too lead chaotic existences; Chris (Val Kilmer) is also a master thief, but also a gambling junky, who once again shows the incompatibility of trying to live a normal life as his marriage is falling apart. Tom Sizemore is Michael who somehow, of all the crew, has managed to etch out some kind of normal family life. Danny Trejo is Trejo who too, as a less seen character, has managed to exist in relative normality.

It is here that ‘Heat’ elevates itself into epic in terms of character study, as every player is given ample story and their tales are as relevant as Neil’s and Vincent’s in highlighting the damage of being dedicated to their perilous careers, how their choice to commit to this or normality, has consistent consequences for all in the final act’s fallout. This central theme of what all of ‘Heat’s’ protagonists choose to commit to the most; is what will determine their fate.

When Heat was released in 1995 much was made of the first ever on screen pairing of DeNiro and Pacino, since then they matched up again in the forgettable ‘Righteous Kill’. ‘Heat’ is undeniably the greater matching up of the two and provided us with the long overdue confrontation between modern American cinema’s premier luminaries in the iconic face off – to end all face offs, coffee shop scene, which is one of the many, many searing highlights of ‘Heat’. Here, two generals of acting match and complement each other perfectly in one of the most memorable and long awaited scenes ever.

One of the greatest testaments to ‘Heat’s’ brilliance though, is not just bringing together two of the best, but the success of letting us somehow forget that we are looking at DeNiro and Pacino, but at “regular fellas” both on each extreme side of the law, both completely unrelenting in their goal to outfox and layout to each other in plain terms what they are prepared to do, without any time for misinterpretation of conjecture. They both know of each other that neither of them will stop at nothing if they do get each other “boxed in”. The Glistening and tense Airport finale, another of ‘Heat’s’ landmark moments will provide the battleground to see who has the keener instincts, honed over decades of being the hunter and the hunted.

Director Michael Mann has never surpassed ‘Heat’, and it is his pinnacle in a high quality career, a master class in direction and storytelling; of how to create something epic with a scale of characterisation that is rarely seen; never better demonstrating his signature style of crisp reflective façades, a focus on character, relationships, and a deft touch in handling big set action with complete submersion and reality; no more emphasised by the impactful bank heist, live rifle fire cracks and rebounds from building to building completely charging the air around, adding a level and depth of sound that nothing in modern cinema has equalled. Many have tried to replicate ‘Heat’s’ heist, including Mann himself in shootouts in ‘Public Enemies’ and ‘Collateral’, but never quite matching ‘Heat’s’ high standard.

This signature set piece is not the only highlight in this Epic modern story, the opening hijacking of a secure deposit van sets the tone for huge, booming action showing how ruthless McCauley’s crew are prepared to be.

The climactic set piece is a perfectly paced, foot chase across LAX’s runways leading to an edgy face off, escalated masterfully by director Mann; using the fluctuating light of runway floodlights and aircraft, and ebbs and flows of sounds from incoming jets, cleverly providing DeNiro and Pacino’s “boxed in” opponents, moments of tense concealment.

The biggest highlight though is the epic scale of character study and series of interactions between all of the films players, each exchange is captivating and compelling, superbly written and believable. No character is insignificant, no event irrelevant in threading together an interlinking tapestry set on LA’s twinkling grand stage, masterfully brought together by Mann in his greatest work.

Heat is without question a formidable Movie and is one of modern cinema’s greatest films. The meeting of two of America’s greatest actors is just the tip of a crystal iceberg. It is the crime saga that nothing has bettered yet and is the most tragic of tales that many comparable movies have failed to match in scale and depth, screenplay and atmosphere.