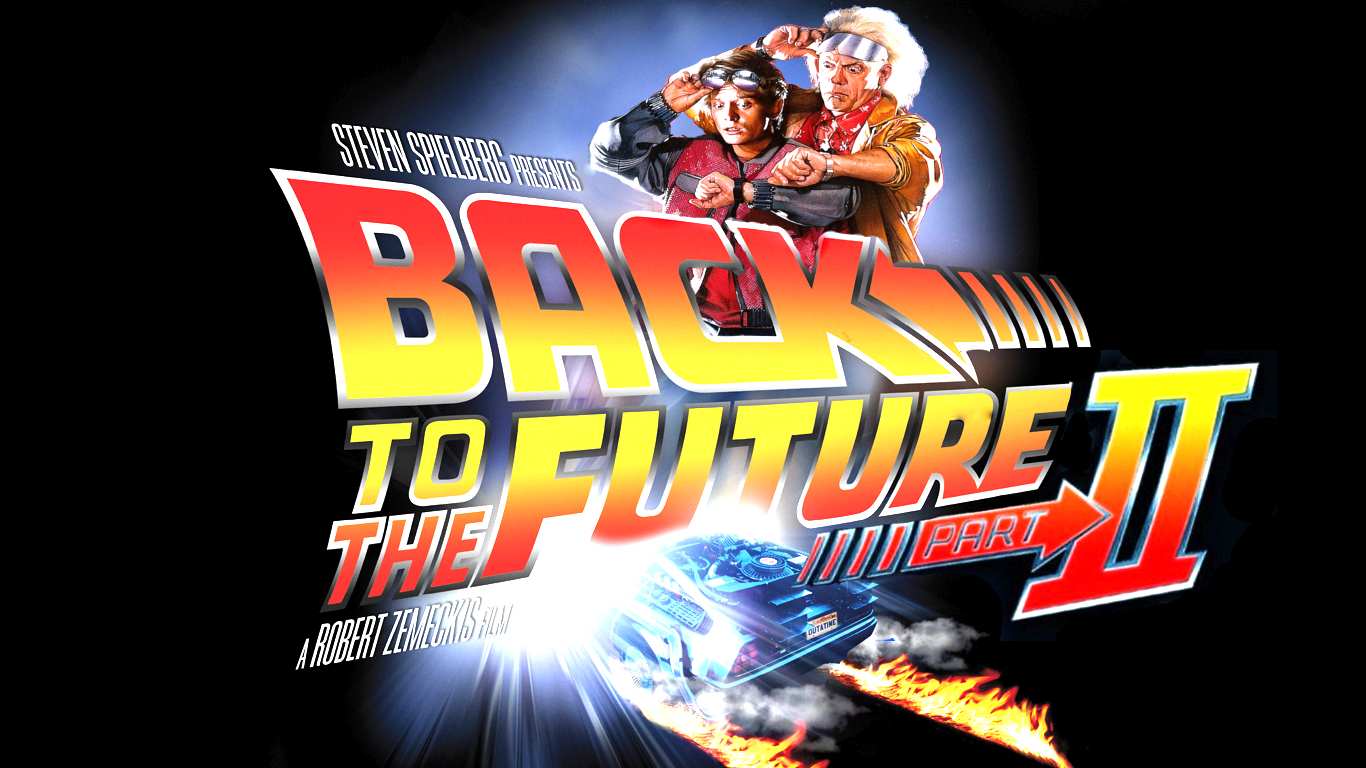 “Back to the Future Part II”, though not nearly as great as the original, is still an excellent film. This movie involves more in the way of time travel paradoxes than the original. It also involves travel into the future, as well as the past and to an eerie alternate present. Once again, the chemistry between Michael J. Fox and Christopher Lloyd works quite well and the film is highly entertaining.

“Back to the Future Part II” begins right where the original film ends, with Dr. Emmett Brown returning from the future and telling Marty and his girlfriend Jenny to come with him to 2015 to save their children from trouble. The DeLorean now has a hovercraft converter and a fusion powered engine. As they take off, Biff witnesses the DeLorean flying and disappearing in a streak of fire.

Once in 2015, Doc shows Marty a newspaper headline from the next day, showing the arrest of his son, Marty Jr., who looks just like Marty. Doc tells Marty to go to the Cafe ’80s to meet Griff, Biff’s grandson, and his gang and tell them that he’s out. Marty encounters Griff and his gang as well as Biff as an old man and Marty Jr. in the cafe. Disguised as Marty Jr., he tells Griff he’s out. Griff calls him Marty chicken, which always annoys him tremendously. A fight ensues, culminating in a skateboard chase scene very reminiscent of the one from the previous film. Biff witnesses the chase, which culminates with Griff and his gang crashing into City Hall. As a result, the gang is arrested instead of Marty Jr.

With their task completed, Doc makes preparations to return home. They’d hidden Jenny, whom he’d put to sleep because she’d shown too much curiosity about her future self. The police find her on the street, scan her identity, assume she’s her older self and take her to her future home. There she encounters the older Marty as well as her daughter and Marty’s parents. She also witnesses Marty getting fired. Doc and the younger Marty try to rescue her, but she encounters her older self and both faint.

Before Doc and Marty meet up with Jenny at their future home, Marty had purchased a copy of Gray’s Sports Almanac, with results from all the major sporting events from 1950 to 2000, in the hope of being able to win some money by placing bets once he returns to 1985. Once the Doc discovers it, however, he throws it out, telling Marty that he didn’t invent the time machine to win at gambling. Biff had overheard this conversation and steals Marty’s idea as well as the DeLorean and the almanac and returns to the past. He returns from the past again shortly thereafter, returning the DeLorean to where the Doc had left it, outside Marty’s future home.

With all their business in the future complete, the Doc returns with Marty and Jenny to 1985. Once there, however, they discover that everything has changed dramatically for the worse. Marty’s neighborhood has gone to pot and his house is now inhabited by a black family. After inadvertently climbing in bed with the daughter, who screams, the father threatens Marty with a baseball bat and makes him leave. Marty wanders back to the center of town to find City Hall replaced with a huge casino owned by Biff. He watches a video about Biff’s success story, including how he’d married Marty’s mother in 1973. Marty screams and is knocked unconscious by the guards.

Marty is revived by his mother, who now lives in a penthouse at the top of the casino, along with Biff. Marty notices that his mother now has large breast implants. He also witnesses a terrible fight between his mother and Biff. When he asks her the whereabouts of his real father George, she tells him that he’s been dead for 12 years and is buried in Oak Park Cemetary. Marty goes to the cemetery to find his father’s grave and screams in horror. The Doc finds him there and takes him back to his laboratory.

At the lab, the Doc explains to Marty what’s happened. He tells Marty that the old Biff from 2015 had traveled back to the past at some point and handed his younger self Gray’s Sports Almanac, which is how the younger Biff had made his fortune. He tells Marty that he must find out the exact circumstances by which Biff obtained the almanac.

Marty confronts Biff and asks him, whence Biff tells Marty that on Nov. 12, 1955, an old man who claimed to be a distant relative had handed him the almanac. He also told him that someday either a kid or a wild-eyed scientist would come looking for the almanac and to kill him in that case, whence Biff now tries to kill Marty. Marty manages to escape from Biff, however, after jumping off the roof of the casino and being rescued by the Doc, hovering in the DeLorean.

Now the two go back to 1955 to get the almanac from the younger Biff. They disguise themselves and seek him out on the morning of November 12. Marty witnesses Biff’s older self handing his younger self the almanac in his garage and gets locked in the garage until the younger Biff takes the car out to go to the dance. Marty and the Doc go back to the dance. After a lot of aggravation, Marty finally recovers the almanac from Biff after Biff passes out due to his father George’s punch, which knocked him out. However, Biff’s gang find Marty onstage singing Johnny B. Goode and go after him. Marty must stop them without being noticed by his other self or his parents in order to avoid a temporal catastrophe.

Outside the dance, Marty encounters Biff, who ends up finding the almanac. Biff punches out Marty and recovers the almanac. Now Marty and the Doc must chase Biff, who’s running down the highway. Marty rides his hoverboard, which he’d brought back with him from 2015. Finally, in a tunnel, Marty recovers the Almanac again and Biff once again ends up getting buried under a pile of manure from an oncoming manure hauling truck.

With the almanac in hand, Marty burns the almanac and restores the timeline. The Doc is overhead flying in the DeLorean and gets accidentally struck by lightning. The DeLorean disappears in a whiff of smoke. But shortly thereafter, a Western Union agent comes up to Marty and hands him a letter which had been in his possession for 70 years. The letter turns out to be from the Doc, who had accidentally ended up in 1885. Excitedly, Marty runs back to the younger Doc, right after he’d sent the other Marty back to the future. The younger Doc faints when he encounters Marty.