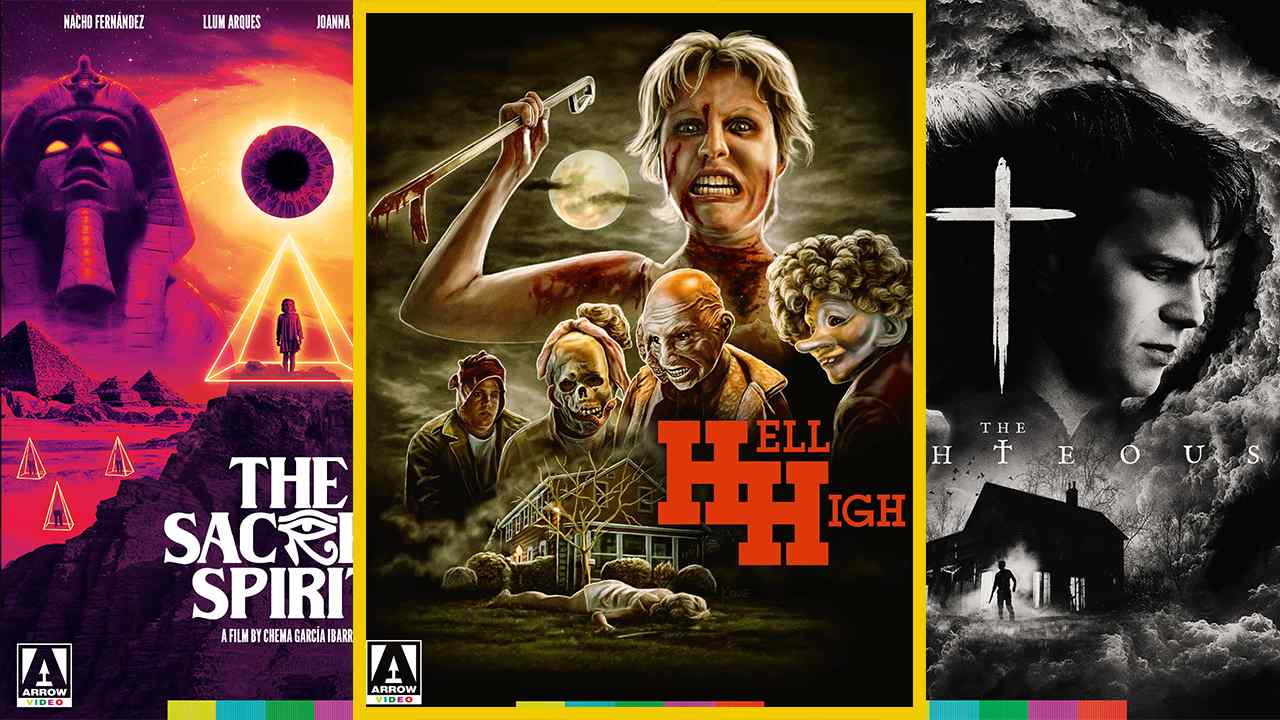 When high school football hero Jon-Jon (Breaking Bad‘s Christopher Cousins) quits the team, he winds up falling in with a group of outcasts led by the sadistic Dickens (played to unhinged perfection by the late Christopher Stryker).

Hell High – released in some international territories as Raging Fury – was heavily overlooked upon its original release but has since developed a cult following noted for its intelligent script, dark narrative, and unique spin on the typical slasher film formula. Brett Gallman of Oh, the Horror! described the film as “a weird, gangly, messy perversion of ’80s slashers.” Popular genre critic Outlaw Vern attributed much of the film’s charm to “weird little touches” that can’t quite be explained but should absolutely be experienced.

Also being released on July 19, is The Righteous, a psychological thriller with an intelligent script, taut direction, and strong performances. Writer, director, and actor Mark O’Brien (Ready or Not) pulls no punches as he confronts grief, guilt, faith, and atonement in his remarkable directorial debut.

A former priest, Frederic Mason (Henry Czerny), anguished by the tragic death of his young daughter, finds himself wrestling with his religious convictions when a mysterious young man (O’Brien) appears wounded on his doorstep in need of assistance. After he and his wife Ethel (Mimi Kuzyk) welcome him into their home, Frederic sees an opportunity for redemption in this mysterious and troubled lost soul, who might just be an emissary from God, or maybe the Devil…

The Righteous premiered at the 2021 Fantasia Film Festival, taking home the award of Best Screenplay and earning rave reviews. Matthew Simpson of Awesome Friday! hailed The Righteous as “an exciting debut feature, a slow-burn character study with excellent performances to keep it moving and brilliant aesthetics.”

Set amongst the bleak and forbidding landscapes of Newfoundland and crisply captured in striking black and white by cinematographer Scott McClellan, The Righteous is a somber supernatural chiller that builds to a memorable crescendo and signals the emergence of a major new filmmaking talent.

The uncanny, the unsettling, and the unexpected combine to devastating effect in The Sacred Spirit, the extraordinary debut feature shot on 16mm from Spanish writer-director Chema Garcia Ibarra, coming on July 19.

Jose Manuel lives a quiet life. He works in his modest tapas bar, takes care of his elderly mother, and attends weekly meetings of the Ovni-Levante, a group of devoted UFO enthusiasts who gather after hours at the office of a local estate agent to exchange information about extraterrestrial messages and alien abductions. When their leader dies unexpectedly, only Jose is left to know the cosmic secret that could alter the future of humanity. And only Jose knows what he must do. The Sacred Spirit is a provocative, humane, and unsparing vision that marks the arrival of a unique new voice in genre cinema.

Jay Weissberg of Variety dubbed The Sacred Spirit as “immaculately framed feature generating uneasy amusement in the viewer.” Martin Kudlac echoed similar sentiments in a review for Screen Anarchy, calling the film “surreal” and “a disturbing story tackled in a deadpan style.”

This volume of Giallo Essentials: Black Edition celebrates the range and breadth of the genre with three lesser-seen films from its early 1970s heyday. In Silvio Amadio‘s Smile Before Death, “things build to a deliciously twisted finale” (The Spinning Image), when teenager Nancy returns home to discover the apparent suicide of her mother, and quickly comes to suspect that her stepfather and his mistress are to blame.

Finally, in Giuseppe Bennati‘s The Killer Reserved Nine Seats, an assortment of wealthy degenerates – including Italian cult mainstays Andrea Scotti and Howard Ross – answer the summons of an eccentric nobleman and assemble in the theatre attached to his ancestral home, only to find themselves trapped in the decaying building while a savage killer picks them off Agatha Christie-style! Mondo-Digital calls The Killer Reserved Nine Seats a “slick, nastily effective” giallo that trades in the world of high-fashion that was a genre staple and replaces it with “an atmospheric throwback to the gothic horrors of the 1960s.”

With gory murders, wanton debauchery, and left-field plot twists aplenty, all three of these oft-overlooked gialli are restored in 2K from their original camera negatives – including brand-new, Arrow-exclusive restorations of Smile Before Death and The Weapon, the Hour, the Motive – alongside a range of in-depth bonus features.