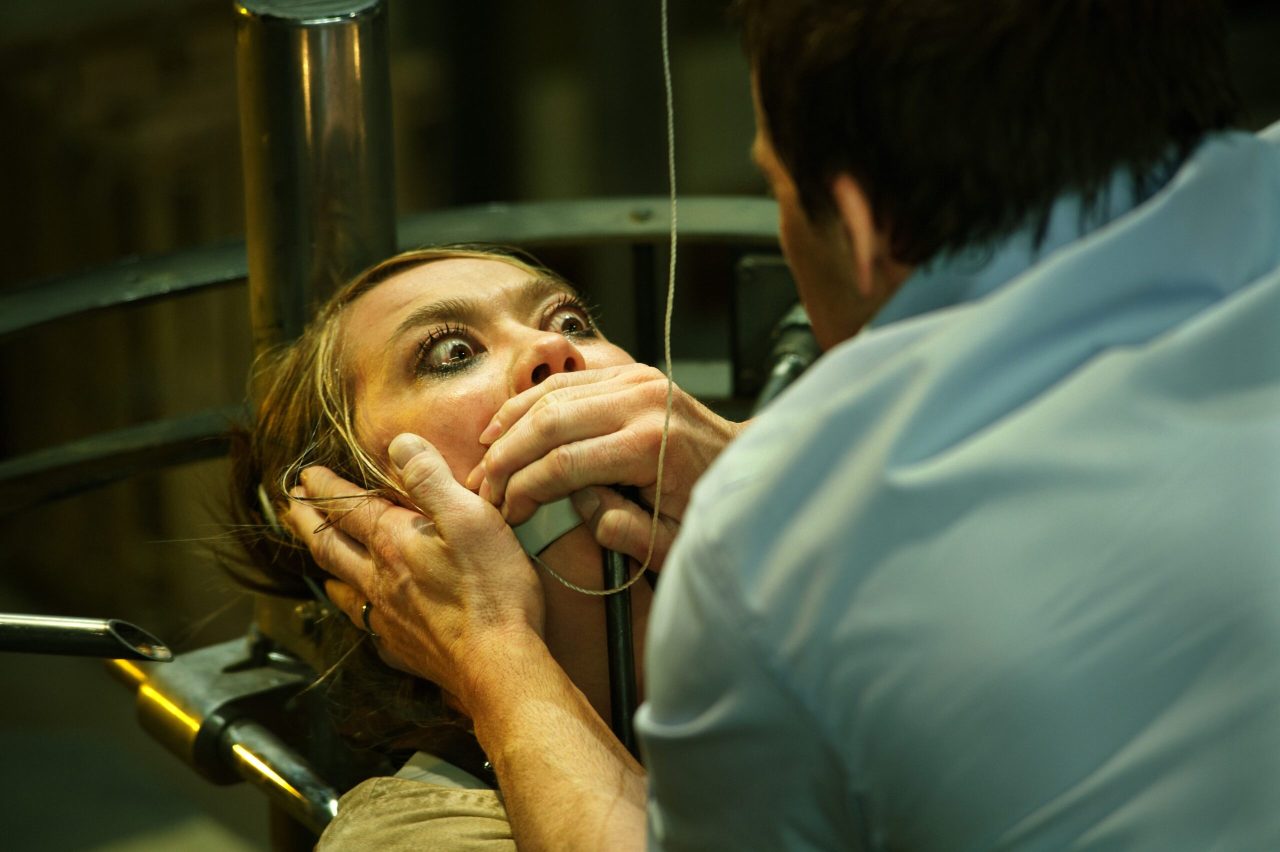 I have never really been too impressed with the original “Saw” movie, but did start to like the franchise after Saw II and Saw III. After Saw III the franchise should have ended, but it did not and now we are given Saw 3D, which is probably the worst Saw film of them all.

The movie begins with showing us a scene from the first Saw film, we see Dr. Gordon cutting his leg off and getting away from Jigsaw’s trap, which is a teaser because he ends up returning before the films ends, it then becomes clear that this Saw 3D film is just a continuation from the first film, we do get to enjoy a couple more of our villain’s traps of death some of them or “public” than in the previous films (anyone who has seen the trailer should know what I am talking about) we are also given a series of rather pointless deaths such as a trap involving a car and a couple of racists which bring us a rather disturbing four-way death scene. These “pointless” deaths do nothing for the story overall which just adds to this films stupidity.

After trying to kill Mark Hoffman, Jill Tuck goes into protective custody. Detective Matt Gibson agrees to take her into protective custody once she signs an affidavit, revealing that Mark Hoffman is the new Jigsaw Killer. Meanwhile, Bobby Dagen, a self-proclaimed Jigsaw Survivor, is put through his own series of tests, where he must save both his friends and his wife. – Imdb.com

After that we are introduced to Bobby Dagen, who is one of the few survivors of the jigsaw death traps, he is able to use his horrifying story to convince other survivors to deal with their own horrible experiences with the Jigsaw traps. Of course, Jigsaw isn’t too thrilled with Bobby’s success and ends up forcing the new author to go through another set of tests; making him save the people he loves including Bobby’s wife who was able to help him through his ordeal after surviving the Jigsaw traps.

One of the only good aspects of this film is the fantastic look it has going for it, which just ends up looking even better when it is filmed in 3D. Another good thing going for this film is the fact that the director choose not to use the quick cut editing that was used in previous Saw films, that being said Saw 3D is a rushed movie, even more so than the other Saw films in the franchise, everything from the development of a (at least) decent script all the way to boring score that is basically “reused” from the other six films.

Obviously, the only real good things that this film has for it besides the amazing look are the brilliant death traps and all of the gore. The building tension of whether the trapped people will die or be able to save themselves is there like it always has been, the movie of course continues like the previous Saw films and makes sure not to leave too many survivors. This seems cruel at certain times and sometimes even goes a little too far making even those with extremely strong stomachs squirm a little. This new film also seems to completely forget what Jigsaw’s motivations were in the previous films for trapping the people in his death traps, he did it to test them but it seems in Saw 3D Jigsaw is nothing but a crazy murderer with no real focus and just likes to see people being tortured. This is one of the many things that just bring this film down even more than its ridiculous script.

Just like Saw 3, the movie’s most obvious problem is that it tries to juggle a number of different stories in one film. The annoyance of trying to keep up with everything that is taking place at the same time really starts to hurt your brain (anyone who has seen the Grudge 2 should know what I am talking about). I mean are we really expected to believe that Jigsaw is able to put together two extremely complicated traps (one of which that is in public) and still manage to stay ahead of the police as well as put Bobby through a few elaborate traps and he is able to do this after almost dying in the previous film? This is not believable at all and just adds to the stupidity of the film. This has been a problem for all of the Saw films though, we have this sick old man who is somehow able to design and build complex death traps, kidnap the victims, avoid the police, etc. This film seems even more impossible to believe than the others though, feel free to watch it to see what I mean.

Maybe the biggest disappointment would be Tobin Bell, who is the bread and butter of the franchise, he is shown in less of this movie that the others, basically making a cameo that is made attempting to tie all of the different stories together, meeting Bobby where he is signing fans books a little while after he was able to escape from Jigsaw’s death traps. How is this possible though? We already are aware that Jigsaw is dead and the first three films happened in a short time span from each other, so how could Jigsaw meet Bobby months or maybe even years after his death experience. It does not fit into the film at all and is just another plot flaw that has been ignored so we are able to get one more Tobin Bell scene.

All of these different flaws in the film are probably what led the filmmakers to bring a “twist” to the movie, basically one that has already been used in the other Saw films where they try to convince the viewers that Jigsaw was able to recruit more help than we are actually shown, this ends up (for me) confirming what I already knew watching the film, that they have run out of ideas for a solid movie and just threw that in there because they didn’t know what else to do.

Watch Saw 3D if you want to, but if you are looking for an enjoyable horror film then look no further than “Paranormal Activity 2” or perhaps “Monsters”, for me anything would be better than having to watch a mangled movie like Saw 3D again, I honestly would rather watch “My Soul to Take” again then be forced to view Saw 3D for a second time.