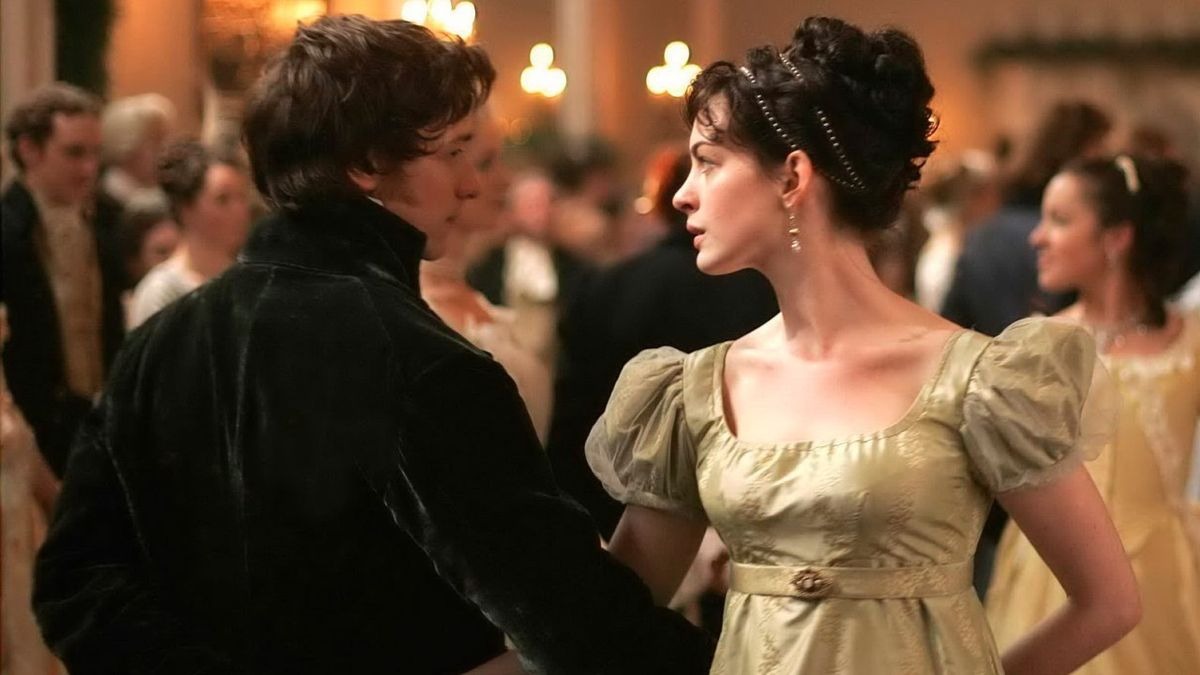 Let me just say this right off the bat (in case you were unaware), Jane Austen is the greatest author of all time. I suppose some might dare to call that an opinion, but we Janeites of the world know far better. At this point, one or two of you might be thinking, “who the heck is Jane Austen?” or “Jane Austen – total chick writer.” If these sad thoughts are, in fact, running through your brain, please do go back to watching Orange County Choppers.

The year is 1795 and young Jane Austen (Anne Hathaway) is a feisty twenty-year-old and emerging writer who already sees a world beyond class and commerce, beyond pride and prejudice, and dreams of doing what was then nearly unthinkable, marrying for love. Naturally, her parents are searching for a wealthy, well-appointed husband to assure their daughter’s future social standing. They are eyeing Mr. Wisley (Laurence Fox), nephew to the very formidable, not to mention very rich, local aristocrat Lady Gresham (Dame Maggie Smith), as a prospective match. But when Jane meets the roguish and decidedly non-aristocratic Tom Lefroy (James McAvoy), sparks soon fly along with the sharp repartee. His intellect and arrogance raise her ire, then knock her head over heels. Now, the couple, whose flirtation flies in the face of the sense and sensibility of the age, is faced with a terrible dilemma. If they attempt to marry, they will risk everything that matters – family, friends, and fortune. – Imdb.com

Anyway, naturally a movie about the world’s greatest author was bound to attract the attention of her most ardent fan (that would be me, by the way). Becoming Jane is a basically fictionalized account of Jane Austen’s early adulthood and her relationship with a young lawyer named Tom Lefroy. 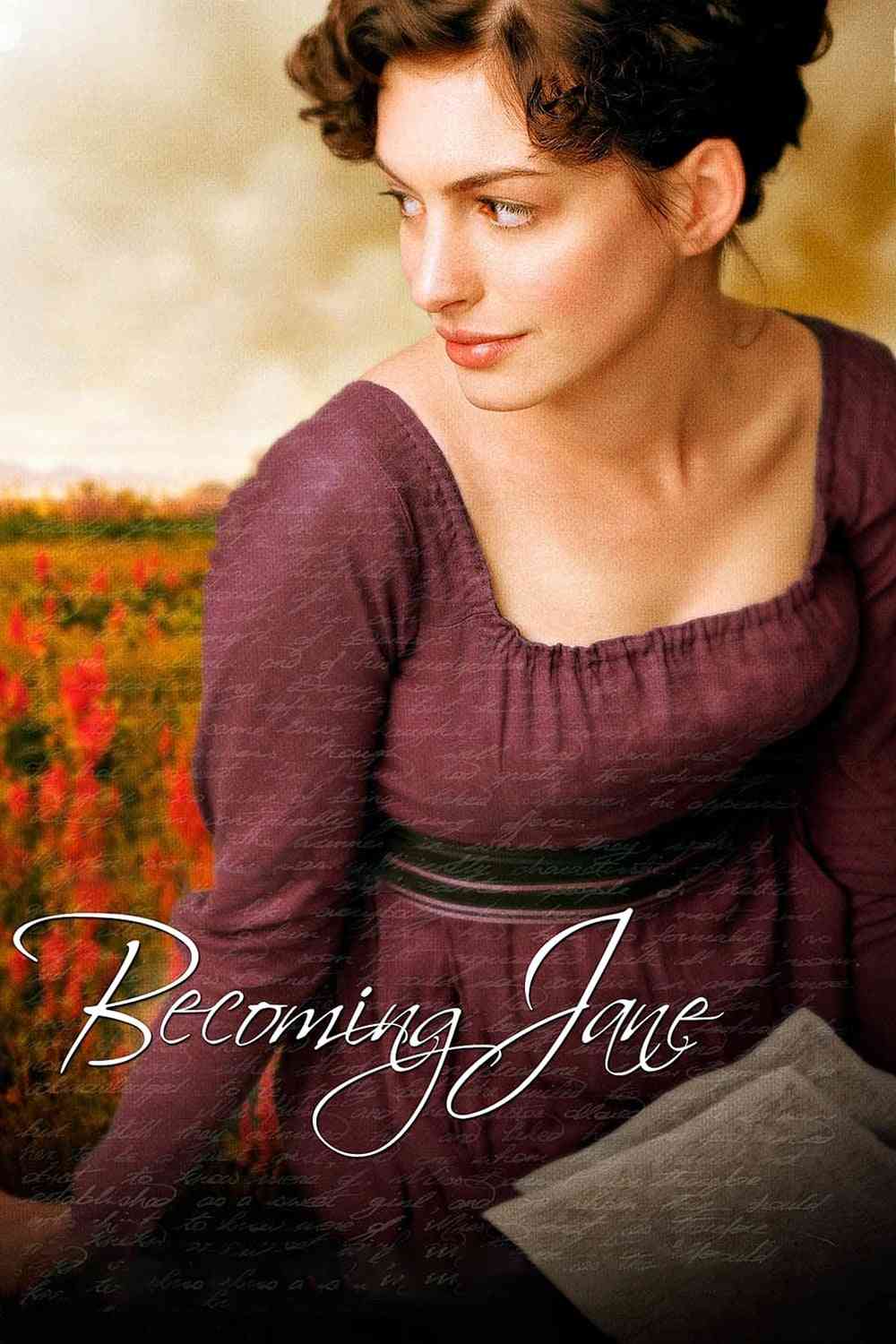 The movie is controversial on two points, and I shall address each. Initially, there is some disagreement as to whether an American actress (Anne Hathaway) should portray England‘s beloved Jane. Hathaway’s portrayal of Austen is entirely heartfelt, bringing the author’s warm, witty personality to life. Her accent was well done, a few misses to be sure, but overall quite believable. As an American, I contend I may be less particular on this issue.

The next issue hinges on the believability of the movie’s plot. No one knows for sure the depth of the actual relationship between Austen and Lefroy. The movie makes several leaps of faith, creating a deep love between the two main characters. There is, of course, little substantial proof that Austen and Lefroy were as close as the movie suggests. By her own account, she was fond of him, and the general consensus among Austen scholars is that Lefroy was the basis for Mr. Darcy (for those of you who continued reading up to this point instead of turning on the Deadliest Catch, Mr. Darcy is a hero of Austen’s classic Pride & Prejudice). 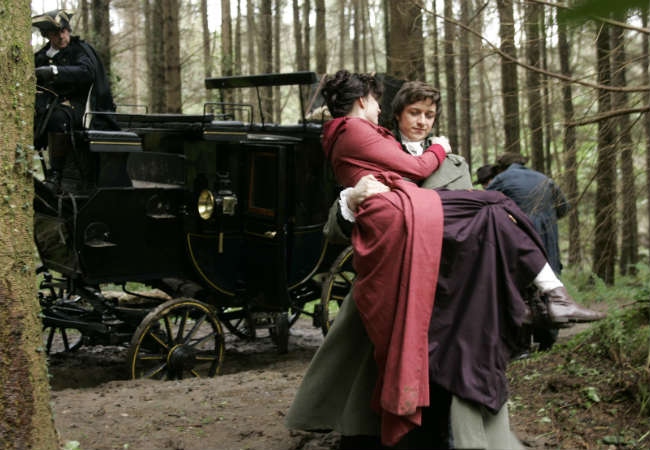 I, for one, refuse to dwell on these controversies. Anne Hathaway is lovely, gifted actress, and I am not so much of a purist that I can’t abide taking a few liberties with my beloved Jane’s life story. I thoroughly enjoyed the entire movie. You truly get a sense of Jane as a person, and it was clear how much of her life inspired her work. Her relationship with her sister, Cassandra, was portrayed beautifully, the two clearly were the best of friends. After watching the movie, one feels a deeper understanding of her novels, and perhaps more importantly of the era in which she lived and the constraints placed upon women, especially, but also the men of the time. I encourage all Austen fans to partake of Becoming Jane.

And for the record, I love watching The Deadliest Catch. Those guys are awesome. I have a whole new appreciation for crabmeat.

For those unfamiliar with Austen’s work and wishing to procure an appreciation of this most wonderful writer, here are my suggestions in which order to read the books.

Pride and Prejudice – Read it first, because not only is it wonderful, it is her most famous book. In fact, truly one of the most famous novels of all time. The characters are so full of life, they very nearly leap from the page. This is especially true of the heroine, Elizabeth Bennett. For the best movie version, try the 1995 BBC epic with Jennifer Ehle (another American, no less) as Elizabeth Bennett and Colin Firth as the quintessential Mr. Darcy.

Persuasion – In my somewhat humble opinion, this is her best book. I first listened to this one on CD (Juliet Stevenson is the goddess of Austen narrators, if you get the book on tape or CD, find one of her versions). There is a part of this book toward the end, where Anne Elliott, the protagonist, receives a love letter. It is not just a love letter, it is THE love letter. I pulled the car over, reversed the CD and listened again. So, I caused a seven-car pile-up, it was worth it. The 1995 movie with Amanda Root and Ciaran Hinds is excellent. 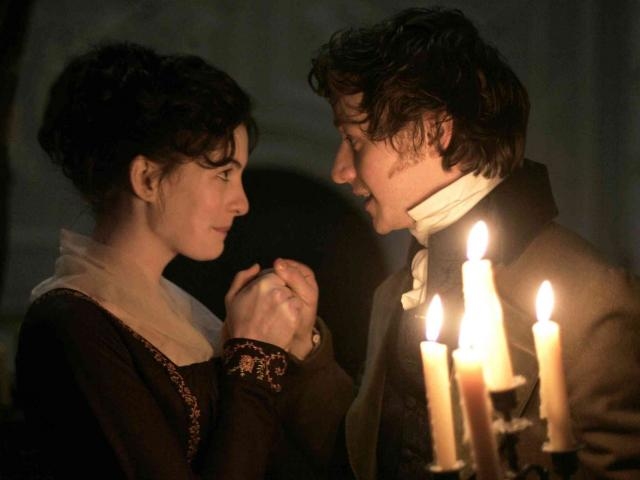 Sense and Sensibility – I think this is her darkest book, but you’ll get a lot out of it. I see many parallels between this book and Becoming Jane. Elinor Dashwood is an exceptional heroine, her strength and resolve is inspiring. For a movie choice, I cast my ballot with Emma Thompson’s version. She takes some liberties with the stories, but good ones. She edited parts out with utmost care and added a bit here and there to enhance the audience’s understanding of this complex novel.

Mansfield Park – The heroine of this novel is the subject of much debate among Austen fans. Some find Fanny Price tepid and dull, but I believe that to be a low estimation of her worth. If you really give this an honest and thorough read, you’ll find Fanny to be a wonderful character. True she isn’t as flashy and fun as Elizabeth Bennett or Emma Woodhouse, but we can’t all be lively and vivacious. This is a great book about morality and honor and discretion. I have no movie recommendations for this one. The 1999 version with Frances O’Connor was cast with some fine actors and the art direction and cinematography were first rate, but this heavily rewritten version is almost an insult to what Austen was trying to accomplish with her wonderful novel.

Emma – I place this one near the bottom, not because it is so unworthy (I named my lovely daughter Emma, ​​in fact), but because it seems so different from the above mentioned titles. Emma is a flawed character, more than most of Austen’s heroines. But still I love Emma, ​​she learns so much about herself, and longs to become a better person. Don’t we all, I ask? As for the movies, I personally love Gwyneth Paltrow’s Emma, ​​although they cut out a few parts. Kate Beckinsale did a nice Emma, ​​but they added some stuff I could have done without. Even the silly, but sweet update, “Clueless,” is worth a look. Alicia Silverstone is so very Emma.

Northanger Abbey – This is just a fun read, I laughed more reading this one than most of the other books. It is one of her earlier works, so it lacks some of the depth of the other five novels, but is definitely worth a read. There are no movie versions I care to recommend.

As a side note, ITV recently produced several of Austen’s novels into TV movies. I have not seen any yet, as they are not readily available in the United States.

In addition, whilst sacrilegious it may be to mention, several people have tried to imitate Austen’s style, writing sequels and prequels of her works. Obviously, this is just for fun and one can’t expect these books to be as exquisite as the real thing (or even close for that matter), but I have enjoyed a few.

One I recommend is Presumption: An Entertainment by Julia Barrett. It is a cute sequel to Pride and Prejudice. It is the story of what happens to Mr. Darcy’s sister, Georgiana.

Sanditon by Jane Austen and “Another Lady,” is another interesting example. The first 11 chapters of the novel actually were written by Austen shortly before her death. The remainder was added on by the other lady. The first section is, without a doubt, the best part, but the rest is a fun read. The “other lady” does an admirable job of finishing up what promised to be another great Austen novel.

There are countless other imitation books, countless books about Jane, more Austen movies to discuss, and I could go on nearly forever about all of it, but I am far too busy listening to my CD of Piano Classics from the World of Jane Austen and Preparing a special white soup from my Jane Austen Cookbook to take the time to type more.

I tease, but on a serious note, all that you really need to know, you can find in Jane Austen’s works. They aren’t just silly little romances (not that there is anything at all wrong with a silly, little romance), but commentaries on the human condition, packaged with humor and vivid characters.

And yes, to sum it up, the movie was really good.